I woke up to the little voice of my nephew saying “Ssssh, Aunty Jo is sleeping!” Alright, he was shouting it about a baby step away from me, but I can’t deny that isn’t not a precious way to wake up. The downside is that by aching back was too sore to even stretch out for morning hugs and kisses. I knew that today was totally about surrendering to the situation and not moving from the house. END_OF_DOCUMENT_TOKEN_TO_BE_REPLACED

That’s literally where the pain has settled itself. I feels like I’m sitting on it and when I told the chiro I felt as though a sumo wrestler should sit on, she didn’t think that was the wisest idea. I feel as though I’m running out of ideas but she seems to have faith for the both of us that my body will heal.

It’s a pity that there aren’t other remedies for the other types of pain in the butt that I have to deal with. Like:

When I’m stressed I cough. It’s this type of asthma thing that I chose as an additional kicker with all the other drama in my life. So my butt hurts like hell, but when I cough it feels as though someone whacks me in the ass with a hammer. So I try not cough because of the pain but the whole back issue is making me cough because of the stress it’s causing … pain in the butt.

I’m most comfortable lying down and have finally discovered the only couch in the house that totally relieves my back and that I can balance my laptop nicely on my knees while my feet are supported on the armrest. Yay four the thought of hours of writing again … if only the chiro hadn’t have burst my bubble and told me that lying flat all day is the worst thing for my back … damn, pain in the butt. END_OF_DOCUMENT_TOKEN_TO_BE_REPLACED

Continue Reading Pain in the butt – project me day 241

Sometimes I could kick myself for my choices. It never lasts long enough to really believe that I’ve ever made a long one, but in the moment it gets so close that I could almost hate myself for the all the life choices that have created me as I am today.

Firstly, I hate that I ever started this blog and that I made it a person one. I hate that I have loyal followers who know my story and want to know what happened today. I hate that I don’t have the desire to tell anything less than my truth END_OF_DOCUMENT_TOKEN_TO_BE_REPLACED 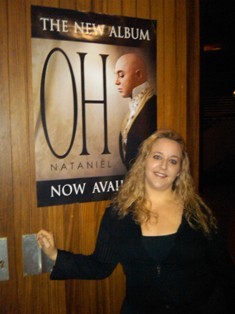 I'm still working on being the blogger that the celebs want their pic with ... so a poster it is!

I have always had the strangest relationship with the Afrikaans language. I considered it to be my least favourite subject in school, which is an absolute lie because everyone knows that maths takes that award hands down.

I say that I can’t speak a word of it, but that’s only because ?I think that I sound like a fool speaking the language with my high pitched girlie voice. Around my parts I could be?referred?to as a kugel and we really don’t sound good breaking into the Afrikaans at all. END_OF_DOCUMENT_TOKEN_TO_BE_REPLACED

Seriously, my back was healing even though I did have a draining day that kept me aching the whole of yesterday, but after a good night’s rest I woke up not feeling that bad.

I was upset when a friend of mine cancelled our arrangements for breakfast this morning. Here’s here from Cape Town and though he would find time to sneak away from the family to say ‘hi’ to me … and thank goodness he cancelled. END_OF_DOCUMENT_TOKEN_TO_BE_REPLACED

I have this little obsession. Alright, I admit to having a few of them but that’s for another blog. Today it’s about the obsession with my stats and social networking followings. Some might think it’s unhealthy but I think that it drives me to achieve more, write more and connect more. On the other hand, it has made me realise that I need to grow a thick skin … and fast! END_OF_DOCUMENT_TOKEN_TO_BE_REPLACED

Continue Reading Thick skin and other accessories – project me day 237

Years ago I was basically a train-wreck of a person. After hitting rock bottom I found myself on this unexpected and beautiful journey of self?remembrance. I don’t believe there is anything to discover, but everything to simply remember about how magnificent we are. ?Anyway … on my road to remembering I started studying metaphysics and found myself captivated by a meditation called Merkabah. Amazingly, it had less to do with?meditation and everything to do with the music that my teacher used to guide us through the process. END_OF_DOCUMENT_TOKEN_TO_BE_REPLACED

I don't think I've had a day start so well and get?progressively more emotional as the hours ticked on. I'm not sure if I'm being too hard on myself still…

Continue Reading In a nutshell – project me day 235

I need tea … it’s always a clear indication of my blogging state when I have at least 3 hot cups of tea during my spontaneously free writing spree.

I battle to distinguish between excitement and being petrified sometimes. It always hits me in the stomach and sends waves and anxiety and these false signals that I’m constantly hungry … hence I’ve been eating a?ridiculous?fortune and the goings on seem to give me this license to forget that ‘project me’ is just as much about my body and my health as it is about my work success. END_OF_DOCUMENT_TOKEN_TO_BE_REPLACED

This post is going to be as punch as the fix and the reason why!

My first article went lie on NewsTime and withing 5 minutes of all the excitement there it was … shocking?criticism?… END_OF_DOCUMENT_TOKEN_TO_BE_REPLACED