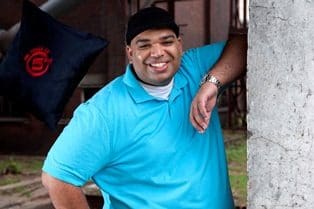 After successfully attempting to break the Guinness World Record (although not formerly recognized - long story which he'll explain over coffee if you like) for the longest broadcast by an individual (125 hours) in September 2006, Rob walked into the Heart 104.9FM offices in Cape Town to enquire about a vacation internship and instead was offered the Weekend Breakfast show.

By December 2007 Rob had also held the position of Afternoon Drive show Producer, making Heart 104.9FM his home 7 days a week. Rob had bigger plans though? Soon came the offer from South Africa?s number one Top 40 Commercial Youth Station 5FM. The move to Johannesburg also saw Rob complete a year stint at Super Sport Blitz as a sport journalist, that unfortunately came to an end due to his demanding radio career.

Having started on 5FM?s weekend afternoon slot Rob has gone on to host the flagship 5FM Top 40 and has now become the king of nighttime radio with The Rob Vember Show airing Monday-Thursday 19:00-22:00 for which he won the 2011 MTN Radio Award for ?Best Night-Time Presenter? Rob has also been involved with The Chaeli Campaign since 2007. Rob has since faced his biggest physical challenge by cycling the Cape Argus Pick ?n Pay Cycle not once but twice in aid of the organization. Since his involvement with the campaign Rob has become the official Patron of the NGO.

Check out the official site for Rob Vember

Rob tells his Project Me Story:

What is your definition of happiness?
Happiness is so hard to?encapsulate? as ultimately it relates to a truth that only you can experience and no words can describe. It truly is a ?feeling? that is experienced differently by each of us. I believe it is that silent solitary moment where nothing else matters but being. Acknowledging that you are here, you are present, you are living. I don?t believe there?s a single greater appreciation.

If you could have everyone say one thing to themselves every day, what would it be?
?I am here for a reason? ? then spend as much time as possible trying to figure out what the reason is.

We all need someone to believe in us. Who is that person for you and why?
I?m pretty sure there?s a few people I could put on that list but I?m not sure that I agree with the premis?of the question.? You are nothing without self belief and self worth. Perhaps I have both because I have people who believe in me but you are nothing unless you believe in yourself.

What quality do you believe we can never be taught because it is our birth right?
We are not alone. We do not exist separately.? We are connected and should strive to live accordingly.

Describe the moment when you realised that you could achieve anything?
I?m not sure that I?ve had that moment yet. It is something I still grapple with. I?ve achieved quite a bit at different stages of my life, each with its challenges but I?m not sure that I can as yet say categorically that those achievements came without doubt. I am a sceptic and cynic by nature after all.

When life gets in the way, what do you always remind yourself of?
I can always go home! Everyone needs that one place where they?re always welcome.

We all have something unique to offer the world, what is yours?
Still searching? (see question 2)

How do you deal with the fears that could potentially hold you back?
The potential pain can only last for so long then it too shall pass. If you want something bad enough you?ll get over the fear and take the leap. If your fear outweighs your ?want? then you don?t want it enough.

What do you believe we have lost sight of in the world as a whole?
Back to question 4: somewhere in the hustle & bustle we?ve lost our will and need to coexist. Greed is the deadly sin that is doing us the most damage. If only we realised that we are mere mortals part of a much greater system.

The Chaeli Campaign was founded on 6 August 2004 by five girls between the ages of 6 and 12. Chaeli Mycroft, her sister (Erin) and lifelong friends, the Terry sisters (Tarryn, Justine and Chelsea) started The Chaeli Campaign to raise R20 000 for Chaeli's motorised wheelchair. They managed to do this in 7 weeks by selling cards with Erin & Chaeli's artwork on them and Sunshine Pots (DIY miniature pot plants).

Although Chaeli is the face of The Chaeli Campaign the spirit on which this organisation is based is the teamwork that exists amongst our five founding members. Our mission now is to mobilise the minds and bodies of children with disabilities and to normalise society through advocacy and education programmes and events.

We run eight different programmes including providing custom-made assistive devices, therapies (physiotherapy, occupational therapy and communication facilitation) and also support special needs children in mainstream schools. The thread that runs through all our programmes and events is the importance of inclusion and diversity in society, based on this definition of disability:

Physical/intellectual impairment is self-evident and can be dealt with. Disability is created by the way in which society responds to the impairment.

Disability is, therefore, a behaviour and an attitude and although we are?directly?involved in impacting the lives of differently-abled children and their families, an equally important task is to invite able-bodied society to a greater awareness of the essential role that people with disabilities have to play in communities - teaching lessons that only they can teach.