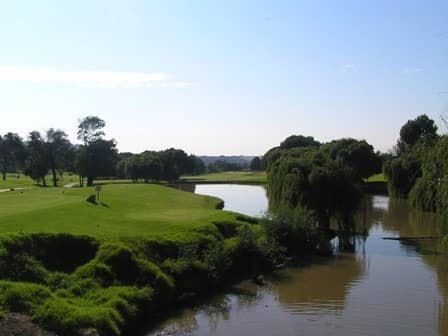 This really is the sweetest thing and before I leave a totally uncensored story by my brother-in-law for you, I want to say a very special thank you to Gone2Golf for allowing me the opportunity to spoil the most amazing gentleman I know to a day of golf at the Glenvista Golf Club.
My baby sis is married to the most amazing man! I don't even know what more to say, but he's always the reminder to me that gentlemen still exist. He gives hugs that make the world feel like a better place and in return, my sister asked me to help spoil him with something that might seem so simple, but truly meant so much ... a round of golf.

Although this present was from a whole lot of months back, Mattie (that's him) lost his dad so unexpectedly and every single time I have tried to do this post, I have started crying before I could even open the window. Months have passed and we are still shocked, sad and wiping tears ... mainly from the eyes of this gentle giant (he's literally ridiculously tall).

His story is special and I wouldn't have been able to treat him if it were not for the incredible team at GolfTweeps (thank you for your patience for this post).

I truly believe that passion is the most important ingredient of all and these words just have the love for this sport written all over. Mattie, when I make my wishes ... I always wish for more opportunities to spoil you with a game that I don't understand, but truly respect ...

Here's his story about a day of golf!

Imagine my surprise when on my birthday after opening what I think was all my presents I get presented with an envelope. I open the envelope and find a voucher for golf for 2 at Glenvista Golf Club through Gone 2 Golf. A little while later I called David from Gone 2 Golf to arrange for the round and?I let my friend Lance know and the arrangements started falling in place.

Lance agreed to fetch me from my house which almost didn?t happen as his son loves golf and always joins us for the walk when we play mashie so he was rather upset when he heard that his dad was going to play golf with uncle Matt.
Lance arrived at my house at 10:45 leaving us 45 minutes to get from Morningside to Glenvista Golf Course. Me made it to the course by 11:15 giving us 11 minutes to get to the Pro shop and check in and to the first tee box bearing in mind we both had to get our clubs out the car set up our trolleys with the clubs and walk down to the clubhouse etc. We made it to the tee box and Petrus and his friend and literally seconds later walked up to the tee box and started the round.

It however didn?t start off as well as I would have liked, slicing my drive down the right hand side. Thankfully it was still in play, my second shot was great I hit my three iron and it landed up just short of the green. The greens at glenvista are lightening fast compared to the courses I have played at so ended up only getting a 6. Hole 2 was atrocious my first attempt at teeing off hit a tree and landed up behind the tee box and I thought to myself oh goodness here we go. The rest of the hole was a write off bar the clever crack from Petrus? friend after I hit my 4th shot into someone?s house and hitting the roof. He said it cant be great having Sunday lunch in those houses as you ask someone to pass the lamb shank a ball hits the roof. I commented yeah I will have a slice of lamb too. The third went ok I decided to play my 3 Iron off the tee coz I would have disturbed someone elses lunch if I hit my driver. Thankfully there was a little wall about 2 inches high stopping my ball from going into the water trough that runs all the way down into the stream. I managed to get a point there too thankfully.

The 4th was brilliant a nice par three and all four of us managed to get a par. The next was horrendous so I wont even go into it. I did however manage to get another? par on the front nine on a par 4 landed on the fringe and putted it in from there. My driver was not my best friend on the day as if it didn?t go into the right hand rough or further I over corrected and hooked it left. On to lunch I had a wors roll with some salad which was great and the drinks were nice and cold perfect for the break. Hole 10 I managed to hit my 3 iron down to the right but still in play leaving 160 odd but my game being so up and down I managed to hit my ball into the lake between me and the hole and took a drop just before the lake and low and behold I managed to hit that into the lake too and gave up on that one.

The 16th hole of the Glenvista Golf Course

The 11th hole I miss cue and a couple of fluffed shots ended before getting to the green. The 12th hole was were it all went pear shaped. I played my 3 iron and landed ok then hit the three again and landed in the trees. I almost didn?t find it but Lance spotted it for me about 10cm from the tree. I decided I was going to try a professional shot like they do on tv and fluffed it and just as was trying to hit it again I realise my sand wedge broke into three. I then tried to hit the ball with the third of my sandwedge and missed that too by then I just picked up the ball and threw it at the green leaving me out of the hole and out of a sandwedge. From then onwards I often landed near the hole needing my sandwedge but hand to make an alternative plan and either kill my lob wedge or softly hit it with my pitching wedge. No need to say it didn?t work out well with either.

Only on the 16th hole did things start coming right as I was not confident of getting my 3 iron over the water so I pulled out the dreaded driver and said to the guys it cant be bad all day and they said yeah it has to work sometime. It did and marvellously too. Started out straight and turning slightly to the left in the end. I couldn?t see the ball from the tee but they all assured me there was loads of space and the left and there was. I landed just short of the hole and there went my good hole over hit the ball and then took 3 shots just to get to the green. The next hole the driver came out to play again and perfectly too second shot just over 60 meters to the hole and eased my wedge just off the green and ended up with a 5 for 2 points.
The next hole was not so great and hooked it slightly I thought I was ok to reach the green from the opening but my swing didn?t agree and fluffed it and ringed out.

The 17th gave me a great drive even the guys were surprised how well I hit it only landing 10 meters from the 4 handicapper ended up with a 6 for 2 there. The 18th my drive was almost better than I wanted perfect and landing just off the fairway 160 from the hole. I played my 5 iron in and landed on the road between the green and the tennis courts and took a drop. Since I didn?t have a sand wedge I tried the wedge and fluffed it twice and then eventually got just off the green on the back side and three putted for another ring. All in all I had a wonderful round with highs and lows lost around 12 balls and a sandwedge. I wasn?t too upset because I have a spare at home. Looking forward to calling David to arrange the next round and have asked him for prices on other courses too.

Thanks to all that arranged it and thanks to David and the guys at the beautiful Glenvista golf course for the lovely experience. ? ? ?