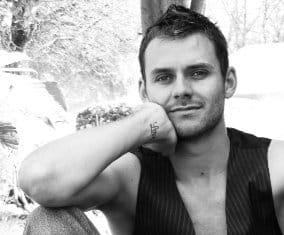 This time I'm starting with a personal note and then I can't wait to introduce you to Bruce J Little aka Little Poof.

Oh I haven't laughed so much in ages and it's so true that laughter is good for the soul and the tummy muscles. Bruce takes the stage at Beefcakes in Joburg for the next two Sundays and if you have a little gay, love a little gay, are a little gay or want to know a little gay, then this show is for you. From hysterical puns that are just slipped in *giggles* to song that will stir a memory and then have you in fits of laughter all over again, then don't miss out on a night with an Large night of fun with a Little Poof?and his show "Gaybaret".

PS ... Beefcakes is definitely the gayest, merriest place in town, with delicious burgers (including the bun free kind for those carbo phobes) ?and lovely cock-tails!!!
Gals, there are some very dishy boys with no shirts on so it's an eye candy feast for almost anyone 🙂

And now ... It's my pleasure to share Bruce J Little's project me story:

Bruce is an Actor, Singer, Writer, Director, Stilt-walker, MC and Consultant.? After graduating from UCT he has appeared in numerous theatre productions and commercials.? He created his own theatre comedy trilogy known as Little Poof, Little Poof! The Fat the Femme and the Fabulous and recently Little Poof! Big Bang!? He has appeared in two of Janice Honeyman?s pantomimes and played the notorious Carl Anderson (Jezebel) on SABC?s Generations as well as numerous characters in SABC3?s comedy series SKETCH U LATER.? He is known for his role as the head on the cake in the First For Women Concierge assist commercial.?? He MC?d on stilts as the Greek God Pan in London for Madame Zingara and has subsequently MC?d for Cadbury?s, Alexander Forbes, loveLife, MTN and Sun City.

What is your definition of happiness?
I think I am ?Happy? when I am suspended between the pull of achievement and the gentle tug of challenge.? It?s a delicate balance.? Too much challenge and things become overwhelming and demotivating? and too much easy success and you become complacent.? You need them both.

If you could have everyone say one thing to themselves every day, what would it be?
?What would a kind and wise person do??

When we battle to believe in ourselves, we turn to someone who believe in us. Who is that person for you and why?
I am blessed with quite a few people that believe in me.? But my relationship with my brother Tigue is special to me because he is very intelligent and analytical and somehow still believes I can accomplish anything.

What quality do you believe we can never be taught because it is our birth right?
It is our birth right to pursue Love.? Some of us go about it the wrong way and even mistake money and acclaim for Love, but essentially it is what we are all here to strive for and provide for others.

How do you deal with the fears that could potentially hold you back?
Fear is something I deal with every day.? I feel the fear, acknowledge it and usually do what needs to be done anyway.?

What have you always dreamed of being or doing and have you reached that dream?
I have always wanted to be someone that uses comedy and music to bring about positive change in society, to promote Love and acceptance of others.? I believe that I am achieving this on a daily basis whether it?s through my micro-blogging on social networks or my work as a performer, MC or consultant.? Laughter helps learning.

When life gets in the way, what do you always remind yourself of?
I try to bear in mind that nothing other than Love is permanent.? All problems and issues eventually resolve or the circumstances or people involved eventually dissolve.

We all have something unique to offer the world, what is yours?
I have a diverse sense of humour and appreciation for cultural diversity, coupled with musicality and a writing ability.? These skills allow me to entertain others as well as promote concepts such as Love and acceptance of differences.

What do you believe we have lost sight of in the world as a whole?
We seem to have lost sight of what can make us happy and what we really need and what is truly important. Many of us believe that money, sex and recognition are what we require to feel joy.? But these often fail to provide happiness in a lasting way.