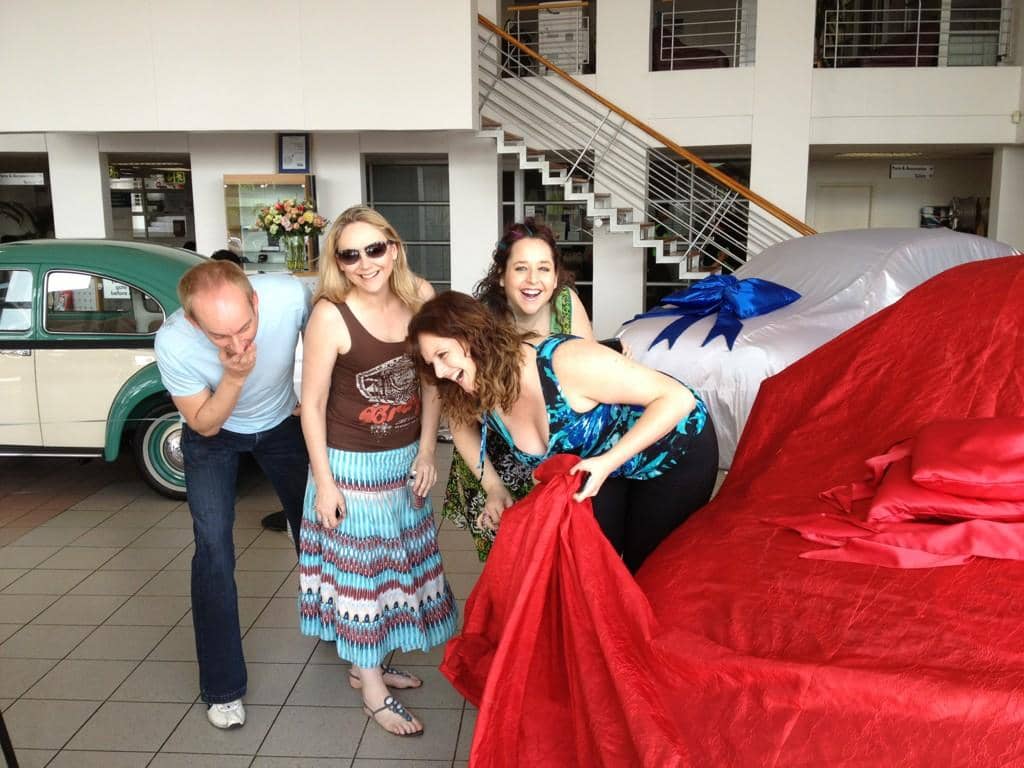 My sister's first car was a Beetle and I remember her fiddling under the hood every time she wanted it to start. By the time she got it, it was already a truly old guy and it sounded like 'rat, tat, tat' whenever she was coming or going. I remember wanting to drive it when I was old enough, but by then the Beetle truly was old and long gone. Instead, my first car was a VW Jumbo Golf II and she was my pride and joy. She too got old and eventually had to be replaced.

Years passed and the Beetle was long gone, but my memories of the car that literally looked like a lady bug always stuck with me. Admittedly, the revival of the Beetle didn't stir at my emotions like I thought it would ... but then something amazing happened.

I have truly worked hard to be recognised as a social influencer and invites to events will always mean so much to me because it's recognition of how I've represented brands in the past. So, of course I was totally flattered to be invited to the Barons Woodmead launch of the new Beetle and was even more touched that there was a charity angle to. Simply, bring a book or cash and you could drive away with the car for the weekend. I did just that ... and I got just that!

@SerenaCG, @Bev_Jayne, @ohgodknows & me trying to take a sneaky glimpse at the new Beetle before the big reveal

Firstly, let's go back to the beginning of this little thing called love at first sight. It happens to me and when it does, that's it, I'm in LOVE. That's the Libra in me and I wouldn't change it for anything. I had that moment when I got my first glimpse of the sexy new Beetle ... and this is why!
It's back! The Beetle we grew up with and loved has made his/her return. Yep, there's a girl one ?and a boy one! ?Both the exterior and the interior are different with a butcher boy and a sleeker girl look. The fin on the back and the leather interior of the boy makes it so distinctively different and I really felt that I was driving a guy kinda car.

Whether this Beetle was the first on the road in SA or not, it's what it felt like with the turning of the heads, hooting and kids hanging out of car windows staring at the familiar shape that is like the rebirth of a legend. One of my favourite moments was pulling into the petrol station and seeing the attendants stop and stare, the all of a sudden fight about who was going to get to be the one to refuel the car. It was just up Pat's alley and he had them all gathered around, showing them the old features that are distinctive to what we know and love about the Beetle and the new features that boast of how times have changed.

A big thumbs up from my one set of twin nephews ... yep, this family has two sets!

The sunroof is so sexy it's silly and so is the dash with all the touch screen, but the space is what blew me away most of all. Knowing that I only had this privilege of driving him for the weekend, I took every opportunity to shove people in the car and zoot off to a different part of Jozi. Whether it was kids in the back or suitcases in the boot, my sister in the front and more kids in the back, heading off to the Gautrain to drop my sis perfect example of the space and pace.

I have to admit that I was like a kid on the road. With the sunroof open, I had a few highlight moments. Of all, listening to 'in the air tonight' by Phil Collins as loud as those speakers could crank up. You just have to experience the drumming piece in that car. It literally sent the rhythm through every cell of my being.

The other features I just loved where a slight moment that the car holds it's breaks on after releasing the pedal on an incline. It's the most amazing feeling and I so wish I had that when I did my driver's licence. The other one that I just love, is a little number that tells you when you should be changing the gear and then what gear you are in. It might not have the most vital purpose, but it sure got my attention and gave the car even more character. I tried out everything from the hooter to all the buttons on the steering wheel and truly had an amazing weekend in an old classic reborn.

Here's what the passengers had to say:
My 12 year old nephew: "It's an awesome ride and I would like to be fetched from school in it any time."

My fiance: "She's really responsive, you touch the throttle and she jumps." ... I did try tell him it was a boy car!

Bye Bye Herbie jr. I had such a special weekend ... now go break someone else's heart

For more info or to take this sexy boy or his girl-friend for a test drive, Tweet @MrShaiGuy of Barons VW Woodmead