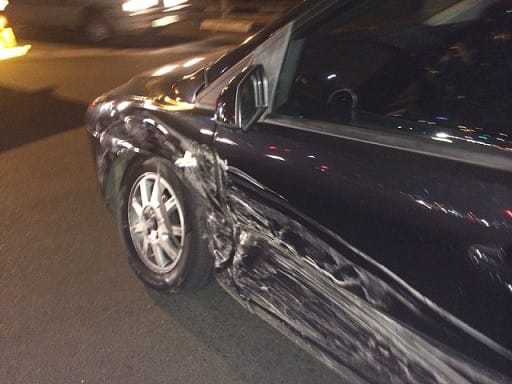 Proudly, I can say that it's my first accident. Not so bad for 40!

It's also not too shabby to say that I was smacked into while obeying the rules of the road.

It's amazing, when I was learning to drive a family friend kept drumming into my head that it's not about how I drive, but how the people drive around me. One on hand, it always made me a little more cautious and on the other, maybe not the best driver because I stick to the speed limit, hate changing lanes and piss off everyone (mostly men) that I drive with.

The up side is that I saw the come jump the robot, let my instinct guide me and swerved away from the car, who clearly took a while to realise he's gone straight through the red and was heading for me.

Here's the part that, that really online sunk in today, when I got a dose of post accident reality and lay in a nauseous heap for most of the afternoon. My car began to spin and hit his for a second time, which buckled my wheel and brought me to a dead halt ... facing peak hour oncoming traffic. The light was red for them and once semi hefty person could fit between my car and the cars I almost flung into.

I'm not sure if the world has changed, or if this is how it always happens, but no one stopped to help. Everyone just maneuvered around my car ... and some even hooted in frustration. Got to love humans!!

My oldest sister to the rescue.
A fight between two tow truck companies.
3 Metro police vehicles who drove by and didn't stop.
And ...
One bruised boob!

In the TedX talk I did a few weeks back, I ended it by saying that Project Me has helped me learn to throw my hands up in the air and say, "why, thank you Universe," and not "Why me Universe?"

Accidents happen.
I don't see some great lesson that I have to learn from this and I am not trying to figure out if I'm not grateful or conscious enough. Money issues might arise, but it's not an issue. I may be in for the sad reality that my car, which really kept me safe through this and has been a part of me for nearly a decade, might have seen it's last days with me, but I am ready for that too.

It's human nature to play the what if game, I've done that for a few hours. My car could have hit the oncoming traffic, it could have flipped, it could have ... could have ... but didn't!! I'm so grateful for that!! A gratitude that I've been preparing myself for every single day of Project Me life.

Yesterday, while lying in bed and trying to figure out whether I really wasn't injured of if shock was just holding me all together, I stumbled across this Tweet, "Life is 10% what happens to me and 90% how I react to it," by John Maxwell.