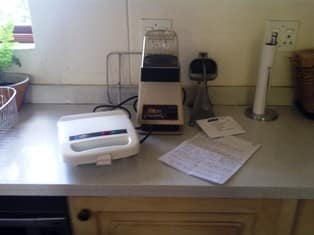 All the good old fashioned things - project me day 481

I really was whacked with the flu. The good old fashioned kind that attacks the sinuses and kills the taste buds. Do you know how sucky it is to have no sense of smell or taste when chocolate is around??

It's even suckier when it's that chilled out weekend that calls for good old fashioned toasted sandwiches, real buttered popcorn (and not the horrid microwave stuff) and a roast piggy dinner.

The little things in life really excite me ... like old fashioned snackwich machines and real popped popcorn, but nothing excites me more than a good old fashioned letter that arrives in the post.
There are a few giggles and blushes at the fact that the letter was sent from my very dear all the way in the Netherlands and it was jam packed with condoms. Hehehehe ... yes, I keep on about natella condoms (which I know exist but sadly he couldn't find). Instead I got lemon, apple and oooohhh cola ;-). Not that I have had any use for them in ages but then my good friend did put in the letter that the expiry date was years away and I should be sorted by then. Ah ... the joy of friends who know you so well.

As for 'project me' ... well, I have proctrastinated over blogging for hours today just to avoid saying that on the friendship front and the boy front there seems to be a bit of chaos. It's not often that I just don't have the energy to share, but that's the space I'm in right now and project me is about being true to me first and foremost.

On a great note though ... it seems as though I am finally being recognised as the social networking mind that I want to be and it looks as though I will have some exciting news on that front soon. On that note ... even though my brain is still in weekend mode, I certainly do have work to do.

PS ... just for Robbie ... I'm still feeling the awesomeness even though I can't smell the roses 😉