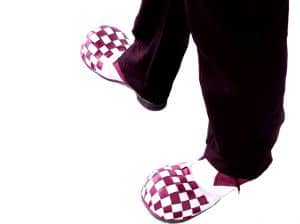 An all-round giggle and smile day - project me day 372

Oooh, I can feel the workaholic kicking in. You would think that after a year of 'project me' and workaholic syndrome being the focal point for most of the year, that I would be able to tick it off the 'unhealed' list. Damn, it's a bitch that traits, addictions or issues don't just get erased from life after a good dose of attention. Sigh ...

It's an hour after the end of the working day and my stats are low, my blurb for the 'project me' media pack still isn't done, my letter to my awesome sponsors has been sitting at the bottom of the screen for two days now, The Project Me Community is still flying stealth with a number of glitches AND um ... wait, there has to be something else.

My day was a far cry from sitting around and doing nothing. On the contrary, I made some damn great blogging contacts, a whole pile of Twitter followers, spoke exciting business to a good handful of peeps and finally synced my Blackberry with my laptop. You know it's been a while when it say: "you have 50 new events ... tee hee!!"

One of those events is my sister's wedding on the 13th of February. Seeing as though December was a food fest and I still can't go back to gym because of my back (but that should change from Monday!) I decided to put on my outfit for the wedding and see how bad the damage was. Okay, I'm a big hipped girl, so that was a given, but if the wedding were tomorrow I would feel good enough ... so that means that anything down the line, with a little sensible eating, and it will be all about my little sis and not my big hips 😉 That's the joy of being goalless ... there's no amount to lose or panic to achieve anything! It's all good, as they say in the classics!

Hence the urgency is syncing it all up considering that this year has started off with a bang (sigh ... no that kinda bang) and I have events, meetings and plans piling up by the day. Last year ended with a bit of financial and work panic, so these events totally left me smiling the entire day.

The giggles and smiles only continued because my Twitter friends are just so charming and I really follow a loopy crowd of bloggers. Somehow none of us are too serious even when we are dealing with the big L word ... LIFE!

Oh, maybe I should reflect back on how my day started: with a chuckle ... and a fart! No, not me!
Once again my 5 year old nephew made his way to snuggle and sleep next to me in the middle of the night. He's supposed to be snuggling with his granny, but I think I'm cuddlier! Anyway, I'm lying there holding this precious angel and wondering why kids weren't an option in this lifetime ... when he lets one go! EEEEWWWW 😉 Well that settles that then.

Not to mention that I had breakfast with The Jock and he settled the other part of my yearning ... The Husband! No, not him for husband, but the idea of having a husband. He's horribly cynical about love and tells me to get a dog if I want it! Although, if you promise not to tell him, I'll tell you that he's not really that cynical and says most things just to get the standard reaction from me. He knows that a terrible thing to say to a Libran. We did spend the entire time laughing ... that's when he wasn't winding me up or upsetting me and then telling me that we weren't arguing when we clearly were. Well, I was arguing with him, anyway!
It seems that I had The Jock giggling at my expense when I told him that I would be asking special people in my life to do a blog on a day with me. Yep, he packed up laughing ... and on that note, he shall be at the back of the queue and only blog in about a year's time! Actually, Greggie giggled too when I asked him to do the first post about me. Is there something I'm missing? I think I'm fabulous ... but let's see what the rest say.

Yet another smile was thanks to Baba who came through and gave me a massage and some healing. I couldn't even get on and off the massage bed without help and haven't lay on my tummy since August when my disk exploded (How dramatic?). While lying there I knew that nothing is going to stop me getting this body strong and when Baba offered to do a treatment once a week I was so eternally grateful. It's besides the point that my lower back feels like it's gonna explode at this very moment again, but that's expected ... I hope! lol!

I also got a call to do my very first skype session for a group of out of town girls who work in an adult store. Their boss is a dude and says he doesn't mind stocking the stuff but he can't bring himself to teach the girl how to answer a question like: "um, where's my G-spot?" Yay, I'm so excited for this one ... next Thursday night I get to breath more life into Organic Orgasm!! In a few weeks time we will then be having a meeting and hopefully I will be doing regular talks and helping all the girls and guys discover the magic of a healthy exploration of sex and their bodies.

Hmmm ... it's not even one week in and Lifeology is filled with opportunity! *Giggle* *Smile*

PS ... Greggie has told me that there are some very interesting errors that spell check doesn't pick up because the word exists but not in that particular context ... Sssshhhh ... don't tell anyone that I ?don't read back but I guess it's time I do ... from tomorrow!! *Another giggle!*