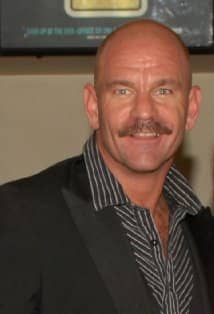 David James Has been in the entertainment business since? He can?t remember when. He has worked in TV, film and on stage. He cut his teeth in children?s theatre and lost his hair on Isidingo. His most memorable productions include. Aladdin, The Secret Garden, Tower Klip, FANGS!, My Fair Lady, Where the Soul Resides, Biko and The Rivonia Trial for stage. Isidingo, Binnelanders and The Wild are his TV experiences locally with Kidnap and Randsom for ITV and Strike Back under international television roles with his most recent TV appearance on Rhythm City currently. Film credits include the Oscar nominated DISTRICT 9, Eternity, Angel Of the Skies, Mad Dogs III, Layla, Winnie and the recently released Ordinary People.

Ordinary People tells the story of the life and ministry of Angus Buchan?who has become a world-wide?phenomenon. Through his Mighty Men Conferences and by a?philosophy of simply believing God's Word, he has directly impacted?the lives of hundreds of thousands of people.

This film - Ordinary People - gives a dramatic insight into the impact his ministry had on several people?s lives. The movie will be release nationwide tomorrow, 5th April and I wish everyone involved the best of luck in the success of this powerful story.

David tells his project me story:

What is your definition of happiness?
Doing what I love , loving what I do , and being able to look in the mirror and still like myself

If you could have everyone say one thing to themselves every day, what would it be?
? I love myself ,I approve of myself , I accept life?s processes, with all its opportunities

We all have that moment when we need someone to believe in us. Who is that person for you and why?
The Doyenne of Musical Theatre in South Africa - Joan Brickhill . I am one of so many that she did /does believe in and that gives us wings to fly!

What quality do you believe we can never be taught because it is our birth right?
Integrity , unconditional love, respect and? the will to live

Describe the moment when you realised that you could achieve anything?
Oooooh way too long a story ?. I would have to tell it

How do you deal with the fears that could potentially hold you back?
Like so many of us I sometimes give in to them ? sometimes I?m strong enough to shut my eyes and just push through believing and focusing on my quote above ( it becomes a mantra) ? and sometimes I sit on my friend Carlynn?s couch? and work through the negative ?ego? and dispel the ?famous 3??DENY DEFEND DISCOUNT? and then jump off the couch,??have a Vodka and ?go chase that dream

What have you always dreamed of being or doing and have you reached that dream?
Exactly what I?m doing now!

When life gets in the way, what do you always remind yourself of?
As long as I?m giving my best ? forget the rest

We all have something unique to offer the world, what is yours?
Aha ? still figuring that one out!!!

What do you believe we have lost sight of in the world as a whole?
Selfless love ? we are so consumed with consuming .having .wanting, using. ?I love?? is so much more ?than two little words

Listen to Angela Ludek interview David on Sunday morning on Radio 2000 about his project me story.