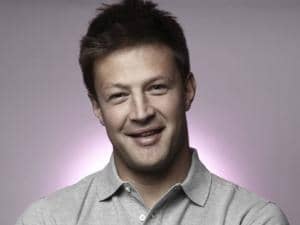 With one of the most recognisable faces in world rugby, Bob Skinstad has recently joined Itec Connect Western Cape (Pty) Ltd as Managing Director.? Itec Connect is a vibrant business solutions company and is the fastest growing office automation company in South Africa ? the perfect fit for this dynamic business entrepreneur!

Bob was born in Bulawayo, Rhodesia on 3 July 1976.? He attended Highbury Prep School in Hillcrest and went on to complete his education at Hilton College.

He attended the University of Stellenbosch where he lived in the Simonsberg men?s residence and captained the 'Maties' (University) 1st Team.

Bob is best known for his national and international rugby career that spanned more than 12 years from 1995 - 2007. Having represented South Africa at all levels, including captaining the U 21 Springbok side in 1996 and 1997, and playing for the SA Sevens team in 1997, Bob made his d?but for the Springboks in 1997 against England. In all he played 42 tests for the Springboks, scoring 11 tries and captained the Springboks in 12 games.

He played Super 12 & 14 rugby for 3 franchise teams ? the Stormers, Cats and Sharks and played Currie Cup for Western Province, who won the title three times on his watch!

After a stint in the UK that involved more work than play, Bob capped off a successful comeback to Springbok rugby in South Africa with victory at the 2007 Rugby World Cup.

His passion for the game continues with his introduction and establishment of The Cape Town Tens which is a firm favourite on the Cape Town sporting and social calendar and one that draws rugby teams from around the world for this first class event.

With a huge heart for social upliftment, Bob has been an innovator with a number of projects including the well-known Bobs for Good Foundation, providing shoes to thousands of needy young school children and he hopes to soon be providing their schools with the technology that is so desperately needed in their environments.

Bob is an entrepreneur and has numerous business interests over the years.? He forms an important part of the broadcast team at Super Sport where he commentates and entertains his audience with his informed and engaging manner. He is in great demand as a regular key note speaker and celebrity guest at corporate functions.

Bob is happily married to Debbie and is the proud dad of three young children, Anna, Tom and Charlotte, and loves to relax by fishing, surfing and enjoying good ?down time? with his family and friends.

Bob tells his project me story:?

What is your definition of happiness?
Having a goal, achieving it, then wanting what you have.

If you could have everyone say one thing to themselves every day, what would it be?
Believe

We all have that moment when we need someone to believe in us. Who is that person for you and why?
My wife and family, because I rely on them relying on me !

What quality do you believe we can never be taught because it is our birth right?
Proper consideration and kindness

Describe the moment when you realised that you could achieve anything?
When I had family, friends and coaches believing in me

How do you deal with the fears that could potentially hold you back?
Override them with positive self talk and hard work

What have you always dreamed of being or doing and have you reached that dream?
Wanted to be a businessman, sportsman, husband and dad ? and I am , now I have be good at it !

When life gets in the way, what do you always remind yourself of?
It will all pass and if it suddenly went bad, I would survive, through positive thought, South African hybrid vigour and sense of humour

We all have something unique to offer the world, what is yours?
?I have a few hidden talents, but I think I was born to make and inspire a positive contribution, in all things that I get involved in.

What do you believe we have lost sight of in the world as a whole?
Down time ?! A holiday on 3g, wifi and TV is not a proper holiday ? we need to be still for a bit more each year. Still and active.

Be sure to listen to Bob's project me interview on Radio 2000FM with Angela Ludek on Sunday 1st April at 8:20am.

One comment on “Bob Skinstad tells his project me story”

Why 2023 is Not the Year to Trust Predictions