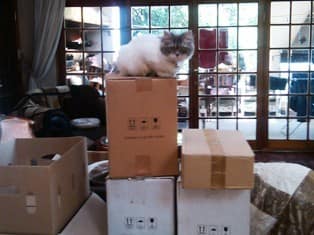 Everyone is laughing at me because I take far too many pictures of Saphirah. I'm officially?censoring the quantity of pricelessly cute moments I capture with my adorable little kitty. There's also the devilish side that keeps waking me in the crazy hours of the morning with either a claw in my head, my butt or my baby toe. I could lock her away but that would break both our little hearts. She had her little girlie op so that she doesn't tart around town and he little claws trimmed so that she doesn't turn my leather office chair into a pin cushion ... but never fear, you would never say she had an op. I mean really, doe she look like she's just had an op???

It seems that of late I have been leaving out a few too many things in the blog and today I woke up with a devil may care attitude. I think it's something in the tea, but there's something brewing in me that knows what I want and very clearly what I don't want and the changes are going to be slow. Therefore they certainly can't be excluded from this blog.

I like someone. I have no idea where I stand with him but the communication is great and very constant. We've met so I can't hide behind the space of waiting to see what he'll think of me and drag up all of my body esteem issues. I still have a few of those by the way.

I am looking better and feeling better but sadly that won't be caught on camera as I had so hoped. This has been a very censored story over the last few days but the verdict is out and I won't be taking up the photography sponsorship or using the pics from the photo shoot. The long and short of it is that I need only those on-board who respect and understand the importance of real time blogging and the momentum is gone anyway.

I have also censored that there are a few friendships hanging by all different threads and I'm not one to keep my mouth shut, so when the time is right I need to find out what's going on with people around me. People deleting themselves from special groups we started as friends. People not responding to special invitations I am sending out. People not saying hello on the array of social chats.

While venting about people, I've decided to create an ebook. I didn't think I would ever do it but it's time. It's time to do a manual for people to be reminded of the courtesy of communication. It goes without saying that those basics should flow over into the social networking realms and I intend to explain why and do a little social?etiquette 101.

In the next few weeks I'm going to be preparing for the move to our exciting new house. Two things have been censored and now I'm saying it.
1. I'm throwing all this shit out and moving with next to nothing. Yes, that means that a lot of things that my dad loved and held onto are now going. I'm not saying it's going to be easy and I've been avoiding trying to sound ruthless, but it's fresh start time.
2. I'm so glad that it's just mom and me moving in together. This is the tougher one because my little sis and myself have grown so close with the build up to her wedding. My brother, on the other hand ... I don't have to say that I love everyone. If you've been following the blog then you know that I have a very strong family connection despite all the sibling rivalry. But the truth is the truth and there it is ... I can't wait for it to be just mom, me, country music without?interruption, never running out of milk and not finding empty tins of coco powder. Oh ... it's mom, me, kitty and the very loud parrot 😉

Yesterday I spoke to a friend of mine who I have grown up with. We know each other well but we also have times when we don't see each other for a very long while. In one of these long breaks I went from being a very sexually insecure girl and blossomed into a very sexually confident woman. When she saw me last I was very overweight and doing alternative therapy healing. When she returned I was writing and teaching about sex. Yes .. SEX!! She's horrified!
She keeps asking me if I'm not?embarrassed?to tell people what I do and say what I say in public. I keep reminding her that it's those very statements of hers that remind me just how important my work is out there. I'm proud to lift the censorship and shame of the sex industry. I'm also proud that I think sex toys, sex shops, sex shows and sexual fun is very needed in this day and age. Yes ... I talk about sex ... freely!! ? Oh and yes ... my Lifeology product is called Organic Orgasm and yes ... my business partner is very proud of me.

Oh ... and the 'project me' part of all of this is that nothing I say here won't or can't be said to all involved. After all, what is 'project me' without telling my truth?
The greatest truth of all is that it's a bitch having to tell it!