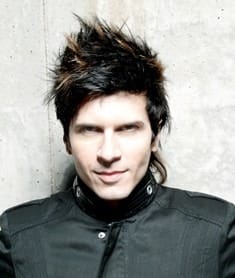 Cito was born in Los Angeles, California on the 18th of July 1974 as Martin Rafael Otto. Most of his childhood was spent in a Hispanic Christian community in New York City. Both parents influenced Cito with their musical abilities - especially with the Spanish guitar. Up until his teenage years he acquired most of his singing experience through his church upbringing.

For missionary purposes his family immigrated to South Africa where Cito continued his high school education. His musical interests took over most of his attention. Cito started composing songs and music and was involved in several bands. When he left high school he joined a ten-piece classic R&B outfit called Heart & Soul as bassist. A year later he left the band and started his own rock band called Moonchild. He then joined 8 Legged Groove Machine, a funk rock band, as lead vocalist.

In 1996 WONDERboom was conceived. Headlining festivals and releasing chart-topping hits, WONDERboom?s fan base grew. They were nominated five times for Best Rock album at the SAMA awards. In 2004 Wonderboom won Best South African Rock Band for the Global Battle of the Bands and went on to achieve second Best Rock Band in the World at the finals in London. WONDERboom have just released their eighth album, The Automatic Shuffle.

In 2004, Cito formed an acoustic side project called Absinth? with Sugardrive frontman Paul E Flynn and best friend, Paulo Rego. Debut album, a Rendezvous at Nirvana was released in December, 2010.

In 2006, Cito was cast for the role of Jesus of Nazareth in the Pieter Toerien production of Jesus Christ Superstar, directed by Paul W Griffin. The production ran for 20 weeks in SA, with Cito singing at every performance. A bigger production of JCS toured Greece & Korea in 2007 and was received with great appreciation. Unsurprisingly, Cito was nominated for a Naledi Award as Best Newcomer in the South African theatre 2007. In 2008, the musical theatre stage saw Cito perform a lead role again as Frederick Trumper with Pieter Toerien?s new production of Chess, The Musical which boasted full houses throughout the run. Due to popular demand, JCS was brought back to the SA stage in 2010 with Cito?s reprise of the lead role. Again, receiving rave reviews.

He also runs his own recording studio where he composes, produces and does sound design for radio and TV and is currently working on his first solo album.

What is your definition of happiness?
Performing on stage, having a sense of purpose and dancing?

If you could have everyone say one thing to themselves every day, what would it be?
I love you..,.

We all need someone to believe in us. Who is that person for you and why?
We should believe in ourselves but sometimes we don?t. it?s wonderful when that someone who knows you really well believes in you. That person is my wife, Linda.

What quality do you believe we can never be taught because it is our birth right?
Peace.

Describe the moment when you realised that you could achieve anything?
Auditioning for the lead role in Jesus Christ Superstar, with no training or preparation for what was thrown at me.

When life gets in the way, what do you always remind yourself of?
I have no control.

We all have something unique to offer the world, what is yours?
My voice is probably the most unique thing I am aware of.

How do you deal with the fears that could potentially hold you back?
It may sound obvious but confrontation is the only way. There?s a serious power in overcoming a fear that debilitates you. It?s liberating.

What do you believe we have lost sight of in the world as a whole?
The value of life and the need for each other.

?Join a host of leading South African bands, artists and celebrities to show?your support for peace in South Africa at the ?Peace Starts 2011? Concert?taking place on Saturday, 24th September at Crawford College,
Benmore, Sandton and enjoy a jam-packed rocking concert too.

The line up will include well known South African bands and artists such?as, The Graeme Watkins Project, WONDERboom, Kwesta,?Shugasmakx, Slikour, Flash Republic, Josie Field, Paul E Flynn,?RedButton, Sifiso, The Honey Droppers and more. All of these artists,?as well as all of the people that have put the event together, have given of?their time and talent free of charge, and all have the same belief; that each?and every one of us have the responsibility to play an active role in?bringing about the harmony we desire in our community.

Entrance is free to the Peace Starts 2011 event; all you need to do is?register on www.peacestarts.co.za. A unique code will be mailed to you,?which then must be presented at the entrance.

We encourage you to bring picnic baskets with your own refreshments,?food (to avoid queues at the food outlets), blankets and sun protection as?the concert will keep you rocking till sunset.

Food and drinks will also be available from various fast food outlets, but no?alcohol will be sold (so please bring your own). Security will be present and?will not allow weapons, drinking of alcohol for under 18 years of age or?unruly behaviour.

Why 2023 is Not the Year to Trust Predictions