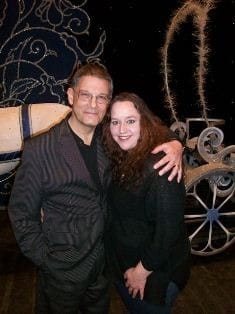 Do only Cinderella's dreams come true? - project me day 575

I will never forget the moment I met Bernard Jay, CEO of the Joburg Theatre

I have always dreamed of writing a book that started with 'once upon a time ...' because somehow, from the very first word, we know it's going be a tale that ends in ... 'and they lived happily ever after.'
I grew up with parents that lived the story that began and ended in a?fairy-tale, yet there is a part of me that I know has become so tarnished by the reality of statistics and friend's ever changing relationship statuses.

I'm Libra, I'm allowed to be the eternal romantic and big dreamer, but I didn't pour those dreams and romantic daydreams into tales of love ... instead, I daydreamed about my career and my life purpose.

It's vague ... my life purpose. In a nutshell, I'm a teacher and everything I ever do, I want to make sure that I share a message that will make people stop and ponder the endless?possibilities for their lives.

I've done the teaching thing and it only fulfilled me to a point, then my heart wandered out of the lecture room and onto a blank page.

After yesterday, I realise that 'project me' should have started with 'once upon a time', because being amidst a fairy-tale world of actors, sets, media and dreamers, was my reminder of the power of stories, no matter how make believe.

Look it's Cinderella (AKA Carmen Pretorius)

I'm always humbled by the invite to any event at the Joburg Theatre and have finally settled into my role as blogger and social influencer amongst the press and guests. It's a role that is slowly paving the way for my own fairy-tale but one that I don't think I give enough credit for (note to self: 'project me' this sucky attitude into shape).

For anyone around the world who doesn't get the magnitude of my adventures yesterday, here it is in a nutshell. Every year the Joburg Theatre has an end of year pantomime that has become a part of this town and the festivities that end a year. For as long as I have known Greggie (and way before our friendship began) his family have never missed a panto. He is the one who drew me into the excitement of it all and in December last year I was already anticipating the story of Cinderella being turned into a Janice Honeyman masterpiece. Never did I think that I would be backstage with the cast when they slipped into their costumes for the first time or welcomed their characters to life in?anticipation of an annual spectacular.

Yes, being surrounded by some of the most admired talent that SA has to offer was a magical treat and I had a whale of a time mingling with the cast that slipped into character as they slipped into costume. The set is beyond spectacular and it was extra fun being able to take some amazing pics. Yet, the one pic that made my day ... no ... my 'project me' ... was the only person not dressed in costume.

It's amazing when someone transitions from a name you admire to a face in the crowd and I was determined to shake the hand of Bernard Jay, CEO of the Joburg Theatre. I imagined shaking his hand and introducing myself with an entire explanation of why I was hanging out at the back stage of his theatre. Instead, and beyond my wildest dreams, Bernard Jay knew exactly who I was.
As once voice amidst thousands of bloggers in this country. As one voice trying to remind the world just how powerful their story is. As one voice determined to show the world that not only Cinderella's dreams come true ... a man I admire and am grateful for, for his contribution to such a vital part of our society ... knew Jodene the blogger. Bernard, thank you for putting the carry on the cake and reading my blog.

My admiration goes beyond the usual wanting to meet an?influential?person. It goes to wanting to meet a person who is determined to keep something alive.
It took me a while to realise the power of being a storyteller and now that I know that stories are the greatest teachers, I have a new purpose and passion. I am determined to take my voice and make sure no one forgets the power of the storyteller.

In the company of the fantastic Tobie Cronje

Cinderella is more than just a story to lose ourselves to. It's a tale of dreams coming true, self worth, determination and well ... a 'project me'! Every story we tell is filled with life's lessons and a reason to never stop dreaming or believing in ourselves. Then why is it the hardest place to get funding and support? That questions is going to take a long time for me to answer, but in the meantime, I want to share another incredible moment from yesterday.

This one is a thank you. Not for me, but for every child (hang on, we all have that little child bursting to experience inside of us) who will get to escape into the wonderment of the Cinderella pantomime. Thank you to those who see the priceless value in the arts and who have sponsored the next two years of pantomimes at the Joburg Theatre. BankservAFrica, you truly are the 'happily ever after!'

Yesterday's events were more than a fun day out at the theatre for me. Something happened ... something that has made me realise my purpose is taking me in the right direction. Nothing happens by accident and my invitation into the world of the arts is far more life changing than even I realise yet. I have the feeling that yesterday marked that say 'project me' started a chapter that began with ... 'once upon a time ...'

The cast of this year's pantomime, Cinderella, with the sponsors, BankservAfrica

I had some explaining to do to Mr Unexpected, but who could resist

After seeing Robert Whitehead in so many productions, it was a joy to finally meet him. Myself, Robert and Stephen