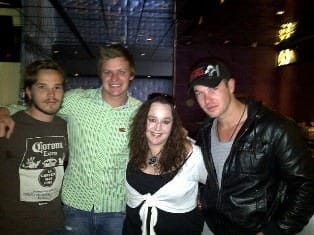 I'm that tired that I'm battling to string a sentence together. It's a combination of a surge of adrenalin that has been flowing through the entire day and the fact that summer is definitely on it's way back to SA.

I have the whole of tomorrow to get some work done because I really couldn't function much today. Don't get me wrong, I was up, about and in front of the computer for most of the day. The only problem is, I was staring at the #followSA timeline on Twitter with a perfect balance of excitement and bewilderment.

It's taking off and it's up to me and a team of very important Tweeps to make sure it goes viral and stays viral. That's been ticking in my head for most of the day. What after the #FollowSA launch on the 31st of August? The timeline is so alive because of the launch but it's gotto remain alive.

That's when I decided to start encouraging others to tell their #FollowSA stories and say what their relationships have developed into since they connected with people on Twitter. I had a few incredible Tweets, but I know it's going to take a lot of work to ignite it.
It's been playing in my mind that if the stories won't find me then I will find the stories and no story is more real than the Tweet that introduced me to a South African band who are on a journey of living their passion and being discovered. Well, I discovered Allegra in the #FollowSA timeline and when I find something I want to be a part of, I hang onto it with all I have.

It was so exciting to meet them at the Crowne Plaza with Derek today. It was even more exciting to make plans for Wednesday night's launch and have their videographer, Kyle White, who created their stunning video, play around with ideas of how turn the event into something even more spectacular. I can't wait to hear them play this song that I love so much and hear even more of their songs. More importantly, I can't wait for others to hear them too and I'm holding out that right person will hear them play and they will watch their dreams come true, just like I am right now, all through the power of social media and networking.

The timeline has quietened down and so am I. I've had moments of absolute adrenalin between making sure I keep up my reputation of responding to every tweet, making sure as many people as possible know about the launch, search for a sponsor that is needed to take the launch one notch up and ... oh, I have other work to do beyond this launch!!

I have to say ... I'm proud of me! I'm doing what I always said I wanted to ... I'm using my voice to make impact and I couldn't be in a better country anywhere in the world to be doing it!