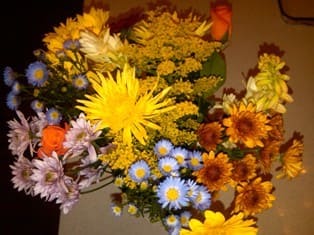 Flowers say so much - project me day 188

Unexpected flowers are the way to a girl's heart

It's a splash before midnight and I have finally dragged myself home and snuggled into my warm bed where I don't have to fake it anymore.

I've felt yucky the whole day ... my throat is on fire and I've been breaking out into cold sweats when I cough. I'm either nervous that I'm going to have a very unflattering coughing spell where it sounds as if I'm going to spew up a lung or I'm holding my breath that I don't cough so much that I have to cross my legs and pray that I don't pee. Glorious way to spend a day.

I've really had to fake it with two meetings in a row and then a dinner whipped together by yours truly. Barring the dessert which is famously created by Greggie.

The build up to dinner has been long awaited and to be honest, I've been a bit anxious. This is a friend of Greggie's who hasn't seen my in nearly 6 years and his memories of me where when I was huge, took my pride in myself and had the most shocking self esteem. The picture in his head really couldn't have been pretty, so I was anxious. To add to it all, we had a person in common who didn't like me, to say the least, so I had to redeem my personality too. It would have been so much easier if I didn't feel as though an elephant was sitting on my chest.

Flowers ... he and his equally gorgeous boyfriend arrived with flowers. Flowers for me.
There's something so special about receiving flowers ... I don't know what it is but it does something to the whole energy of the room. An energy that was way beyond my expectations and even though I really didn't feel well throughout the whole evening .... but still managed to cook a fabulous meal ... the flowers made me smile.

Even though I faked the whole night through and haven't felt this sick in a while ... not forgetting that I managed to still cook a great meal 😉 ... it was a very special night.

After nearly a decade I got to redeem my sparkling personality and my beautiful body and I did it the only way I have lived 'project me' ... I had such fun and totally forgot that I had anything to prove ... but best of all, I got flowers.