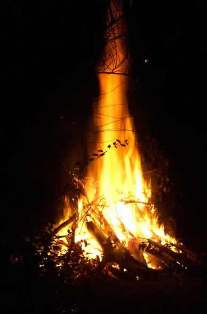 I don't know where the morning has gone and there is so much to prepare for tonight's festivities with my very special and open minded friends.
A part of 'project me' is proving to myself and the world that goals might not be as important as purpose and so there were no resolutions set at the beginning of the year. Instead, I took what I would have made as resolutions and understood why I wanted to do them. Some have fallen away ... like going to gym! Others have blossomed ... like sharing the pagan festivities with my friends and my readers.

It's one thing to tell the story of the origin of times like Yule (Christmas) and Samhain (Halloween) when the whole world is celebrating it, but it's another thing to explain it from where I'm standing.

That would be the Southern Hemisphere! Most of the traditions of Celtic paganism (my great love) made their influence across the world because of the Northern Hemisphere season changes and all pagan festivities are based on honouring mother earth and her season.

Now that that's out the way ... Tonight is officially the start of winter down here in the South. Winter was celebrated by a festival called Samhain where they honoured everything of the earth that was dying. The leaves are brown, the earth falls cold and still ... you get the pictures. And so it became the honouring of 'the dead'. Because death is the end, it has to be followed by a new beginning and so it would be fitting to be the Pagan New Year.

A very long story short ... but when formalised religion came along they took the dead a little too far and introduced spooky things like ghosts and made pagans into witches instead of wise crones (women) and it all went south from there ... excuse the pun.

There are many things in this world that fascinate me, but knowing the oldest beliefs and traditions of time is one of my greatest loves. I am, what you would call, a modern day witch. I didn't do that ... the world did that! I just follow the oldest beliefs of time and believe in the power of my womanly ways ... do some research and you will see that I'm witchy by nature just because of what I do, think and say.

How far I have come in living my truth and being proud of my beliefs has come shining through. Tonight I have two new friends join us for the celebrations. It's people who haven't known me for very long and all of a sudden I feel as though I have nothing to hide.
My brother is carving the pumpkin ... because he's a wizz at that and there will be pics tomorrow.
I'm blogging about it without a care in the world and before I would have gone back to check just how many Twitter followers I might have lost along the way.

I think that's a fine way to start a new year! So if you are in the know or not, from my and my witchy ways I wish you a happy Southern hemisphere new year and a warmth in your heart that guides you through the winter 😉