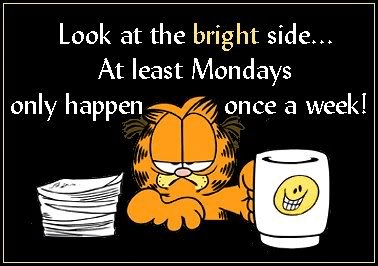 Garfield and I hate Mondays - project me day 213

Garfield is my favourite character and of all the moments I remember about his lazy ass character,? I remember the day he tried to get away from Monday so he posted himself off to another country. What do you know, thanks to the time difference and his pathetic attempt at running away from his Monday issue, he had two Mondays in a row.

I seemed to have manifested one of those Garfield Mondays. I?m not even relating it to wishing the weekend was any longer because I was in total workaholic mode and did nothing social what-so-ever. I only flirted a little online but made sure that I hid away during peak working times. Well, that was the better part of the weekend to be honest.
Monday was actually my escape from workaholic and back to a little bit of sanity. You know, like getting dressed, having a decent meal and moving my body a little more than walking from the kitchen to the bed, to go pee and back to the bed.

I?m sure Garfield would do his ?I hate Mondays list? and it would be pretty short. It would basically say ?I hate Mondays because they are Mondays?. On the other hand, I had a slightly different list and it goes a little something like this:

I woke up with back pain because I?m a lazy ass who hasn?t gone to gym in nearly 2 months. I have brand new cross trainers, super not sexy gym pants, a towel with a zip on it so I can store my odds and ends and a brand new funk water bottle. I hate that I haven?t used it yet. I hate that I said I would start on Monday ? and then I didn?t.

I popped my last blood sugar control tablet this morning because I was too lazy to dash down the pharmacy and renew my script. I was supposed to shoot past in the morning but cut that too fine because I wasn?t in the most active mood. I then threw the empty tablet pack in the handbag (that has less chance of being discovered in the Bermuda triangle) and decided to pick up the script after work. Well, it?s nearly 7pm and I only remembered that little ?note to self? now. F@$#@!!

Following on from that, I have had one distraction after the other and the weeks are passing without me putting together the opening talk for ?Organic Orgasm?. Greggie and I come from totally opposite ends of the scale and he thinks we should market the talk and when the time is ready I will be ready. I can?t take one little step forward on the marketing until I have the talk. Oh look ? chicken and egg! So I?ve decided to work from home tomorrow and was so excited about working in my pyjamas all day and getting cracking as early as a workaholic can possibly phantom. I can?t do that now that I have to go pic up my damn tablets.

I could dash down to the pharmacy in my tracksuit, glasses and no make-up but the last time I did that I bumped into the only person who would get the most amazing satisfaction out of seeing me looking like a haggard bag lady. Yes, it?s totally vein but I still can?t bring myself to do it. I might not practice the Jewish stuff but it pumps through my veins and treacles out into my public image.

I hate money stress. It somehow directly leads to me thinking I don?t do enough. How can a workaholic feels as though she doesn?t do enough without creating mayhem and literally sabotaging my passion? We had one of those reality checks today. The capital is dwindling and it?s time to make money from the talks and courses. It?s time for my writing to start generating money. It?s time for me to do the things that I clearly have to work harder at. Or is it? Oh the chaos of the ego.
Since I had the meditation and asked the question, ?what is soul craving?? I can?t believe the difference. Okay it might not be completely visible through my display of workaholic madness, but the workaholic has been having the best time. I?ve been bold enough to throw myself out there a little more and that?s what I?ve been doing. I?ve been taking baby steps and tasting the world of marketing myself and pushing my talents onto the world.
Well, then why the hell doesn?t it feel like enough? I hated the end of the month when I worked with Baba and really thought that now that I?m doing exactly what I want to that it would be so much easier. It seems I didn?t read the fine print in the ?easy manifestation manual?. In tiny letters, down at the bottom, its says ? ?there is no easy manifestation!? I?m sure I hear the chuckling of the Gods in the whispers of the wind.

Alright dammit, I?ll be a little bolder and braver! So Greggie and I are meeting with Sportsy (because he?s very good at marketing) and he?s going to help us along. I?ve never been the greatest at marketing, but I also know that it?s something that I have the potential to be really good at. How has that changed? I already know I?ll be good at it and a few weeks ago I was pushing myself into marketing as though I was going to spend the night in a lion?s den.

Part of our marketing is for the children?s website that was supposed to go live like 5 months ago. It?s lagging behind so much that in our Monday meetings Greggie and I gloss over the list and ?sigh?. Well now I?m just frustrated and irritated and forcing myself to still have fun with something that I was so damn passionate about. Here we are sitting with a fully animated children?s website and I can?t show it to the world. I?m sure Garfield would stuff an entire lasagne down his throat at the thought.

The eyeliner is fading, just as she said it would. It?s not like a normal tattoo and now I have patches of eyeliner gaps. I didn?t want to put eyeliner of my scabby tattoo ? so today I had patchy eyes. Greggie did well in containing his bitchy comments and only slapped one on when I pointed out it?s patchiness.

My hair is too short. Whether anyone likes it or not is totally not the point. I wore it up the whole day today because I couldn?t face walking past anything that has a reflection for fear or realising that she cut at least 5 centimetres. Yes, I?m annoying 😉

It?s not all bleak I guess. I am making contacts in the writing world and have decided to brave facing a whole lot more publishers and throwing the children?s book out there. In the meantime a I?m doing a little book swapping read thing with a new friend I met through the blogging world. ?He?s asked too see the children?s book and I?m going to read his first novel. Watch this space for a review!
It?s good, I haven?t read in ages. I need to read. I need to remind myself that success doesn?t come from being the workaholic freak.

I did say my back?s killing me right? I did say that I haven?t been to gym?
Did I say that I haven?t had one sympathy binge though? Okay, I?ve sounded totally pathetic today but I haven?t given myself credit for having totally learned that food doesn?t fix anything. Despite the money issues hovering and the fact that we got to a shopping centre that we never go to, to fix my sim card of my cellphone that I never use, only to discover that there was no electricity and having to drive back to our usual lunch spot ? I still at what my soul was craving.

Right, some optimism please!!
I was thinking about blogging on my way home and wondering what 'project me' would sound like after a day like today. Then I had this thought: I chose to be me! I could have chosen anything but I chose to be me. That's a damn powerful choice! Now what to do with that choice? I reminded me that I am that powerful and I can do anything ... absolutely anything!

Well, it?s blogger of the year time and I?ve sent out the request for nominations for the Cosmo awards. Now it?s time to do some marketing and get the nominations in for the SA blogger awards. Now why don?t I have one moment of hesitancy about marketing this? Don?t answer ? just see it as a good sign!

Text guy is back to texting me daily. Yay!!

I?m seeing Mr Big when he decides that it?s time. That was always the way we did it and there?s no point in putting on my big girl shoes and stomping around now. It?s always worked for us and it will perfect timing when we calls for the ?date?. I think my friends have just freaked me out a little that Mr Big and I don?t fit into the collective of lovers or friends with benefits. Why does the world have to define everything? Why can?t it just be ? um ? well ? undefined and totally misunderstood?

On a final note ? and to show that I?m still totally all about ?project me? and having fun, being conscious and so totally goalless, I?d like to note the most important thing of all ? there is jasmine in the air 😉