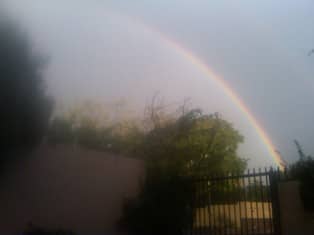 How a rainbow answered everything - project me day 110

It's a rainbow reminder

Of all the reasons why I'm so grateful that I have my own business and the freedom to work when I want to and where I want to, the greatest reason of all struck home at 5am when the screeching alarm wen off, signaling the start of Mr Big's day ... not my day ... mine starts at around 6:30, with a push.

I know ... most people have showered, had their third cup of coffee and downloaded their first batch of emails before I surface, but hey ... that's the gift of choice.

I have worked for myself since 2001 after experiencing one year in the corporate world. I remember going home after deciding to resign from a world that is truly alien to me. It's not the corporate world ... it's my sparkling personality that slowly started to wane under the pressure ... I mean really, do I look like I want to eat a shark or be a shark?

The other side is just as scary and not for the faint hearted either.

Greggie and I drew up a list of things to complete this week, with a spill over into next week too. One of them is to write another blog post for Step Aside. I got started early considering I was home and ready to work at some crazy hour ... like 6:30 am!
After getting the smaller things on the list done and dusted ... I stared at the blank screen and prepared to jot down some notes for the blog post ... NOTHING! ?Why doesn't it just flow? ... So, I did the thing that weighed down most of my mind. I started to google 'sugar controlled diet' and ended up in this maize of information that did one simple thing ... it pissed me off! Big time!!
I've been eating the freaking way they said you should ... low gi, moderate exercise, a lot of water, herbal tea ... I got so lost in it all that I then convinced myself that I had been doing it totally wrong and that I should almost double my carb intake. Hmmm ... does that sound right to the rational mind? ... nope ... ok, so then let's cut out carbs completely ... nope!
Healthy ... right! It's about controlling this sugar without medication for the next four months. It's goalless and fun ... why, oh why is it so freaking difficult if I am following the steps?

Pottering around the internet for more ways to grow my social networking skill also hit a wall when I realised that my fantastic plan to take lifeology to the next level was totally foiled by the chaos it would take to do one simple thing ... change my twitter name. Oh freak ... I have no idea how many places I have used that name and I would have to go everywhere and replace it with the new one. That's humanly impossible. ?... I'm not one for humanly impossible because I know that if you dream it you can be it. Only difference is ... I don't know if this ranks high enough on my dreams list ... why, oh why can't it be done in the click of a button?

Of course the money issues creep in when I realise that it's the 20th of the month and I'm getting impatient about having something financially rewarding to show for my passion. I can't do that until I've got something to show people or refer people too and my websites and blogs aren't active yet. So ... I go on a mission to make sure they are as ready as they can be to go live after my Knight has made some changes. It is ... it's all ready and waiting ... why, oh why do I have to be so organised? Now I wait ...
But no ... after chatting to Greggie I know that I can write some blogs and bank them in drafts ... um, that's not how I want to blog! Can you picture my personality putting on a pretty new dress and then taking it off because the world can see it later. Nope ... why did I get such an impatient and child-like energy that could never, ever blog and not be able to share it with the world straight away? Do I have to even work on changing that part of my personality?

Through it all I can't say I wasn't having fun ... yes, the anxious butterflies were in the tummy the whole day ... oh ... that might also have to do with the fact that Greggie has managed to convince me that I should do a test run on my voice in the recording studio for some voice overs ... and that's happening in a few hours. I think I have this nasal, annoying voice ... but hey, who's to argue until I've tried it ...right?

So ... even though I'm having a fun enough time and not being too obsessive, the niggling questions won't go away ... the one questions ... the one we all ask ... What must I do?
I love that question! It can be thrown pretty much into any situation and it's always the sneaky attempt at shifting responsibility. So, you are saying you will be the one to do it, but you would like someone else to tell you what to do ... sneaky indeed!

With more questions than answers consuming most of my day, I decided to focus on the arb distraction of unfollowing all of the people on twitter who have been dormant this year. Now that was entertaining ... why do people register and tweet for like a year and then not tweet since August last year? Now those are much more aimlessly distracting questions ... but questions none the less.

I had spent since 5am moaning about how cold it was and it's not even nearly as cold as it's gonna get. I shivered my way through the day like moaning Minny while planning the soups I would eat throughout the winter and counting calories just for good measure. Does that even really work? ... when ... WOW ... this rainbow magically appeared. Isn't that how magic an miracles work? They just appear in a totally neutral and unannounced fashion.

All of a sudden it wasn't so cold and I was standing ... in my socks ... in a puddle of water and staring at something we've all seen and though was very pretty over and over.
I decided, however, that I could see it as something I ?had seen before or I could open my eyes and look at the rainbow and life as though I had never seen it before. Blink ... erase the past programing and ... blink ... see it through fresh eyes.

See the eating, the working, the writing ... the answers to the repeated questions ... see it all through new eyes!