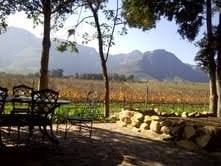 I grew up holidaying in Cape Town when I was very little, but haven't been here since I was about 8 years old. Okay there was the short trip down the year before last but nothing touches the time I have had in this week and a bit. The experience I thought I would have and the journey this time has taken me on has been worlds apart. Trips like this always make me miss my dad the most and I knew there would be a certain pull at my heartstrings for our Sunday adventure.

I'm not great on the rules of social networking and haven't done too bad on my aimless wandering. This entire trip has been based on Twitter connections and Facebook status's that have made it glaringly obvious that Lifeology is in town. So, why tackle Sunday's adventures to the winelands and differently.

The main aim of 'project me' is about lessons learned and not regretting anything, which is really tough when having limited time in such an incredible part of the Cape. My decision was to Tweet and see which wine estates floated to the surface. That's my general?philosophy?with all my social interaction and I have really been blessed with the connections I've made. One of those fantastic people is @HelderbergInfo (the site) who suggested a few estates and before I could whip out the map, Dombeya Wines (the site) had tweeted me. Now that's how you do it! I also had some fabulous tweets from AlleeBleue (the site) and had plans to visit those two farms as well as a few more that bubbled to the surface.

Here's the 'project me' part of the day. Greggie said it was my day and I got to say where we were going and make all the plans. Okay, that part of my personality isn't very well 'project me'd' and I get myself in a state of total disorganisation. It's no secret that my geography suck (and after not being able to identify the Hugeunot monument so does my history).

Dombeya wine, Werner and me

Of course Werner from Dombeya had told us to book lunch and I had done the calculations that went as follows: leave house by 10am and get there by 11am ... a quick 'hi' and gulp down of wine and off to the next estate where it would be much wiser to lunch. Never had I thought that my hours were so far off the mark when I filly settled into the experience of wine tasting.

But before we even get there, let's talk about my mapping skills and my GPS skills for that matter. I hate being designated drive but have realised that I hate being the chick who has to find out where the hell we are too. It started off well, with me holding the map with the right side up, but went pear shaped from there. R44! N1! M-something! Now I must find R304 on this thing! I kid you not ... Greggie ended up driving with a map on his lap ... and I swear, I gave it my best shot! I can't say I was any better with the GPS and that's because my spelling as a far cry from perfect and nothing ever matched up ... because those places don't actually exist!

Even though it's the middle of winter and the vines are starting to shed their leaves, driving through the wine farms is breathtaking. Passing the signs that point to familiar wines is even more exciting, but heading out a new experience is thrilling.

Here's the part of my personality that I really had to learn to love most of all. The part that is very reputation based and isn't really prepared to try something too new just in case I make a total fool of myself. That part of the personality is most tested when presented with a bucket that is clearly there to spit into. While Werner, who truly is a wine connoisseur was explaining to us about the blends, how the Dombeya and Haskell wines are made and are different, I was wondering how I would possibly remember anything to blog. So I've decided to leave the experts to what they do best and I'll stick to sharing the madness of my mind during new experiences.

I dream of being many things, but a wine tasting chick is not going to be one of them. Firstly, I'm never going to get my head around that spitting bit and I felt a little tipsy after about the 5th taste. Let the record stand that I'm not great at faking it and have to thank Werner for being the most hospitable host and only rolling his eyes at me once. So I'm far from a wine anything ... but wow! I have learned that wines have a price and an age for a reason and haven't had great experiences with appreciate red wines until yesterday. What a joy to discover that they can be smooth, silky and bursting with surprising flavours. Okay ... I'm totally stoked that I could actually smell the peppery scent! Yay me!

Oh my gosh, time vanished faster than I could have imagined and I had to be kind to myself when it was too late to visit Allee Bleue as promised. It reminded me that we always end up saying 'time was too short', but it also sealed a promise for me to return in the best capacity I know how ... as a blogger and goofy non-wine chick whose dad taught me that there's no place like home!

Thank you to my Twitter friends for making my blogging wine Sunday so special. You haven't seen the last of me and I promise to practice that wine spitting thing!!