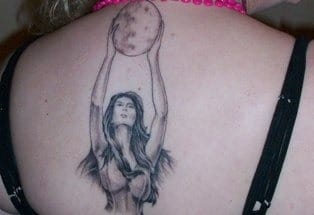 It's freezing cold and seems to only be getting colder. I'm a bit of a ninny in the cold but that's not the point of the story. It's more about my tattoo that's been hidden?behind?jerseys and jackets for ages now. I love it! I hear that lots of people have a moment of regret after they have their tattoos. Some even panic that they've made a major mistake ... not me ... I adore my goddess.

Well ... there's one little glitch.
When the world cup started it was about the time that tat was beginning to be revealed. Do I look like such an avid soccer fan that I'd tattoo a soccer ball on my back?

Wait, there's more ... ?my darling hairdresser who I just adore and couldn't wait to flash him my tattoo, well he seemed to know what she was holding at all. Greggie did tell me in fits and giggles after his visit to salon.

When I originally chose the tat it was always my intention to add to her and even though I'm attempting to be as goalless as possible, I have got plans. She's a symbol of who I've become and all that I know I am. I also know that there is so much more of me that is 'me'. In a nutshell, the sexier I feel, the more I want to add to the tattoo.

Well ... I need a boost of sexiness stat! You see, this very sweet, flirty and chatty guy was obviously flipping through my Facebook pics when he came across my tattoo. In his attempt at flattering me he commented on my tattoo and then asked me if I was holding a netball. A netball?? OMG ... a netball?

It's a moon people. Well, does it really matter what anyone else thinks it is? That's been the 'project me' question for the day. I've known that I wanted to add something to my tat along the way and now I'm pushing to put her in the milky way with a burst of stars so that the moon is?unmistakable.
Is that really a reason to add to a tattoo that is only important to me in this world?
Ok, so my ego totally freaked out that anyone dare thing it's a ball and my ego is rushing to put stars next to the very clear and obvious moon ...

Thanks to the gift of being conscious and asking myself 'what is my soul craving?', I'm a little more chilled than I would usually be and I've totally come to realise that mystery and perception and beautiful things. So let people think it is whatever they see ... that will be their truth and how can I argue that when it's one of the greatest lessons I teach?

So, nothing's changing right now. I'm sticking to my original goalless goal ... I'll add to my tattoo when the timing is just right! It always is!