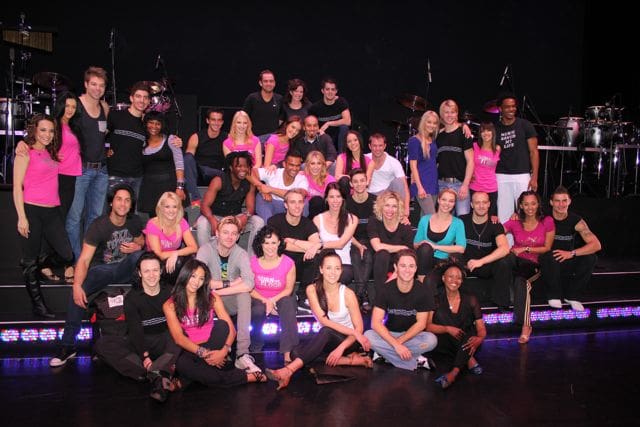 What does spending a day with an international dance company and a group of fab SA celebs have to do with 'project me'?

Let's see! When I started blogging the mission was to show the world that it is possible to live each day taking full responsibility for everything that happens to us. I know, it sucks to thing that's true, but it is. I'm also not the greatest fan of the word 'goals', but throw 'purpose' at me and I will tell you that you can achieve anything.

Was it ever my goal to be invited, as a blogger, to exclusive and thrilling events like the dance experience hosted at the Joburg Theatre? Um ... no! It wasn't my goal to blog much past day 365, but here I am heading my way to the next milestone of 600 days.

Purpose is a totally different ballgame and then yes, I was so meant to spend one of the most?fun-filled days of my life, and the most thrilling day of my blogging career, in the midst of dancing.

Project me goes to the Joburg Theatre

In the beginning I thought I was doing something so rare. I thought that I was offering something to the world that not many people knew how. After a while I realised that world is full of bloggers who have a message to put out there. I also realised that many people got the concept of living their own 'project me' even if they call it another name. I came to see that so many people put purpose before goals. I also knew that, no matter how many people were getting it 'right', there will never be enough people sharing those stories.

I didn't choose my purpose because I was trying to be different or wanted to prove that I could do the impossible. I didn't even choose my purpose ... well, we choose everything but most times we are just choosing to remember what our soul knows we will be fabulous at. Living with purpose and showing the world that with courage, consciousness and a sense of humour, you can do anything ... that's my purpose!

I'm allowed to have favourites ... right?

There have been so many days when I've thought there's no way on earth I'm ever going to manage to live my purpose. I've contemplated going back to a career that never fulfilled me and I've thought of searching for work when I know that my spirit would slowly die in a job. I've cried buckets and I've had sleepless nights that I don't always mention. In those times I always do two things:

I look back at what I have managed to manifest in my life and sometimes it's the smallest thing. I also look at who believes in me and usually end up sitting in a heap with my mom who keeps reminding me that I'm exactly where I should be.

After a while I realised that I also needed inspirational stories to drive me forward and from that 'your project me story' interview was born. I wanted to know that I wasn't alone and telling the world that anyone can achieve anything they wanted. I wanted to know that there might be millions of bloggers out there, but that my blog was still filled with my life purpose.

One of the questions I ask is: "Who believes in you when you can't believe in yourself?"
I think we are programmed by the positivity movement to say that we have to believe in ourselves, but that's the same as setting those goals. If you don't have purpose you won't bother getting on the field. If you don't believe that you can then you won't get out there either ... until someone tells you you can.

Stefan Ludik is doing it

Sitting in the audience with tears running down my face ... some from laughter and some from awe ... I realised that ever person on that stage was living their 'project me' story and the way their leapt into the unknown was the way it should be done ... that's what living is all about.

The irony is that I was counting every blessing that I was a spectator and not one of invited guests who were taken on a journey of learning a routine from the Burn the Floor show. Straight up ... being thrown in the air by a stranger and twirled across a stage by anyone (no matter how talented) doesn't seem to fall into my purpose at all. I say that now, but judging from the looks on the faces of the very brave celebs, I bet they never thought they would be there either.

Only after the dance routine to "turn the beat around" was complete did I think ... holy cow ... this is going to be an interesting morning. One hour for a group of newbies to that dance routine to make it happen and be taught by some of the best in the world. There's only one way to get that right ... let go and have fun.

They actually did it and they did it freakin' fabulously. After an hour of giggles, tripping over each other, huffing and puffing ... they did it and it was spectacular.

It's 'project me' so there's a life lesson here ... for me and for you:
Sometimes you've just gotto say 'yes'.
I have a best friend and business partner that I love with all my heart and soul, but he has this habit of trying to understand why I have made some of the choices I've made along my career and in my life. When he asks me for explanations I get that feeling like I'm going to explode with?frustration?... it's aimed at me ... because I don't have the explanation, I just have the knowing. So I have learned to say 'yes' a lot.

I'm sure not everyone asked to take part in a day that was purely about fun, would have said 'yes'. What's fun for one person surely isn't fun for another and if I were asked to attend as a dancer over that of a blogger ... ?I am sad to say I might have said 'no'. My head would have told me I wasn't fit or strong enough and my ego would have reminded me of the clumsy dancer I was as a child ... but I watched people who did say 'yes' and I know they will never be the same again.

So many people ask me how I am managing to achieve what I am and I sit and think of clever ways to explain it all ... but sitting in an audience that was no bigger than a crowd at a dinner party, I realised that I have been saying 'yes' for a very long time ... and this was yet another invite from the universe to take me to where my dreams are a live and ... burning the floor!

A very special thank you to the team from Joburg Theatre, the cast of Burn the Floor, the judges and super brave SA celebs for a very special day in the life of me.

After sifting through 1500 pictures and needing Greggie to keep the Libran "I love everything" in check ... here are a few pics but a good few hundred can be found on the Lifeology Facebook Page.

Girls will be girls ... right Jolene?

Bongi and I bumped into each other in the elevator and trust me, I had no idea he could burn the floor like that ... wow!

Um ... not quite sure who was taking the leap of faith between Graeme Watkins and Giselle

They made a great team and I have to admit ... they are both my favourites in their own right! SA's talented singer, Graeme Watkins and the true dancing queen from Burn the Floor, Giselle

Look out for Bongi in this year's Pantomime at the Joburg Theatre ... he's Prince Charming in Cinderella! *giggles*

Thank you to Pat Sloane Photography