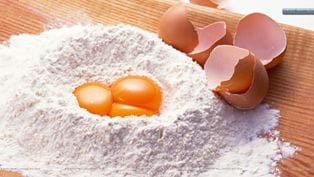 Kitchen confession: my fear of flour - project me day 781

Tuesday nights are the traditional gathering of Greggie, Pat, mom and me. We've been meeting for years and Pat has named it our 'feelings night' because we really do get together and give each other the ear we need to listen and the eye roll when what we saying about our lives or moments in our lives is so far from the truth.

With a night like that it usually calls for comfort food and I try my best to put a little extra care into whatever is going to be served, so the heart can feel the comfort too.

In their own little way, both the special men in my life (my best friend and my fiance) and suckers for being spoilt with food and they also know how to do that little thing with their voice that gets me cooking what their heart's desire.

In steps my confession ... I hate baking! Literally if it has anything to do with flour I want to run for the hills. It's the fault of school, I ?tell you. It's the fact that I got like 0% for home economics and on my report it was suggested that I don't take the subject one day longer.

And now it's Shrove Tuesday ... neither of the men (boys at this point) are Catholic and it comes from the tradition of clearing out all the flour from the house before Lent begins on Ash Wednesday. So Twitter has a hashtag #ShroveTuesday and before I know it, the Tweets are flying and this Jewish girls is being asked to cook pancakes for the non-Catholic boys on a Catholic holiday ...

I've seriously managed to dodge flour since high school and all of a sudden it seems to be finding me. I even attempted to bake bread for Pat for Valentine's Day and despite using a ready made bread mix ... there was still a little disaster when it bubbled out of the pan. Thanks to Greggie's understanding of me not being great at getting much wrong and then knowing I'll never touch flour again, he pointed out that he's seen great chef's clean out the oven after a little spillage from time to time.

Once again, I think my bestie could see that if I didn't step away from the flour (once again, a ready made pancake mix) it would be the last time the fluffy white powder and me ever met. So he swiftly stepped in and took over the making of the pancakes ...

I know what it is ... it's that I have to listen to the instructions. I have to add the exact amount that I'm being told to and there's no variation. I hate that and I've worked enough with my crazy personality to know this ... if it flops and I've followed the exact instructions it means that someone proved it can be done and I still ?stuffed it up!

I've never claimed to be all sorted and that's what this blog is all about. So I identify the crazy bits of my personality, acknowledge them and hopefully do something different. I personally think that at least mixing the ready made pancake mix was a fantastic start.

Of course, the filling was a different story and my confidence was flying high with my chicken, mushroom and pineapple recipe that was ended off with shredded wilted spinach and grated cheese ... can you see the confidence difference? ;p

2 comments on “Kitchen confession: my fear of flour - project me day 781”