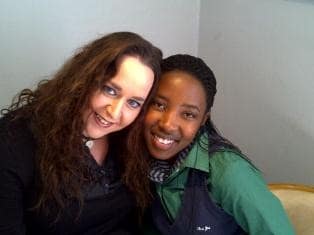 Yes, I can say that I'm pretty much on track with what I expected from all my dreaming, hard work and determination. I can also say that the littlest things have made me realise that I can dream even bigger.

Last night Mr Unexpected called me to ask if we needed anything more than milk and I asked for one red lollipop! I get that it's totally new so most things he does is going to seem like the sweetest thing on the planet, but try look at it as the metaphor that I saw. I asked for one and got a whole packet of cherry lollipops ... isn't that so much like our dreams?

On the other hand, I didn't ask for my man to be sick and for me having to play nurse (he called me matron ... ?but let's not go there) and having to demand he goes to see a doctor. I'm not surprised that he has blood pressure so high that he could keel over and die at any moment, but if thinks this loving , nurturing and ... nagging nature isn't going to try rectify that then he has another think coming.
I have been waiting a long time for the dream of my knight in shining armour to come riding into my life and today I felt as though the horse kinda had a limp. Project body is very real to me and for some reason I think the timing of this relationship will be good for more than just me. So it's off to the doctor tomorrow and we are going to do something about this blood pressure together ... after all, if anyone knows that all you need is someone to believe in you, it's me.

I seriously nearly fainted when he told me how high his blood pressure is, so by the time I got to the Ofra offices for my project body make-up trial I was in a state. My newly found friendship with Khanyi, who doubles as my project body partner from Karisa Wellness Spa, has grown so strong in such a short time and I was so grateful to be spending the morning with her when my head was in such chaos.

Thank you to Khanyi from Karisa Wellness Spa and Ofra Cosmetics yet another awesome make-up trial today!

It's always such fun for girls to play with make-up, but it's even nicer for girls to be able to talk about anything. The combination of friends chatting and eyelids being coloured slowly calmed my nerves and got me to focus on more than just the fact that my dream man is very sick.

I have a zit on my chin the size of a ... um ... not to?exaggerate?... okay, anything I'm thinking of is a total exaggeration, but trust me, it's huge. Khanyi worked her magic and made it look as attractive as possible before sending me on my way for a day filled with exciting meetings and more dreams coming true.

I have such a great friend in Nick Duncan from My Scoop SA Aggregator and Greggie and I often jump in the car and head off to meet Nick for lunch. The chat is always a combination of personal going's on (as personal as dudes like to get ) and then a whole lot of social media, SEO and blogging. He's a wealth of information and someone I can turn to for any answers I need.

The timing couldn't have been better after a very exciting social media chat because while having high-tea at The Winston Hotel and checking out the potential to have some awesome talks and Tweetups at this spectacular venue, I got an email. An email asking me to be on Radio 2000 on Saturday morning. Of course I was saying yet and I'm slowly watching my dream and hard work pay off as I become a voice in South Africa that gets to spread the word of how powerful our online force is and all that it is only getting strong.

It's always so refreshing to know that Twitter has given me the great gift of friends like Nick who I can turn to and double check my thoughts on what exciting future social media holds in SA ... another dream I await to see unfold.

On the last note, Nick has convinced me that Google+ will become something and I am going to put my efforts into being a part of it. So if you are on, find me jodenecoza@gmail.com ... also ... how about hitting that Google +1 button and showing me some project me love!