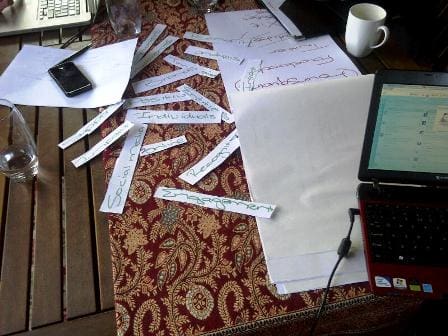 It's seriously not something that happens in a very formal way between Greg and myself and follows the pattern of Lifeology, where nothing goes like the rest of the world ... except for the usual business realities, fears and drama of course.

Sometimes we think we are so unique in things we do and sometimes we feel as though we are just another salmon swimming with all the rest and it's taken us a long time to realise that the salmon is still unique in it's own special way. That's made it somewhat easier to settle down about being lost in the ocean of people involved in any part of personal development that we follow.

There is something very powerful about what is going on in my life at the moment and although I could blame in on the fact that all the planets are traveling forward before the first one goes retrograde on the 25th of January, I am less inclined to give any of my power away to any outside forces anymore. It's taken me years and over 700 days of consecutive, conscious living and blogging to truly feel that even the outside forces are determined by me.

I could feel the energy when Greggie and myself set out on a brainstorming mission with an individual we connected with as soon as met. Alright, there's a little sneakiness but when we are done there will be so many exciting things to share with you. In the meantime, intense brainstorming was the name of the game.

Did you know that this is where I panic? I get myself in a total state that what I say is going to be completely senseless and that no one is going to write down of the words I throw out there. I keep thinking I'm not going to be on the same page and actually asked far too many times if what I was saying was still on track. Of course, it's never all on track all of the time but at least I didn't beat up on my brain and slowly let the creative process flow. That's the theme for this year ... creative!!

Creative in thinking, acting, brainstorming, cooking, bedrooming ... I did, after all, promise myself that there was no holding back this year.

With all of the thinking and planning going on, I still have a #FollowSA event happening next week and was on TV today for an interview on a program called Sistahood. This sent a flood of Tweets and I'm usually on the ball to respond but I just didn't have it today. My brain literally feels like scrambled eggs now and I'm even going to do something that I don't do often ... I'm going to leave the Tweet responses for the morning and not let that part of my brain, that thinks everyone will unfollow me if I don't respond, have some fun and chill time after this blog post is done.

During our breaks between long thinking stints we ended up talking about meditation. I have tried every form of meditation that there is and finally settled on the good old 5 breaths a day and letting my imagination run will about all that I can create and achieve. It took me ages to be okay with that and not get lost in the believe that I had to sit in a certain position, chant anything or get too lost in technique and all of a sudden I came to the most powerful realisation of all ... simple!!!

That's what we did today ... we took the most simple and common of words and turned them into the most powerful sentences that we hope to pave the way for a whole new future for ourselves ... I like that plan and I think I'm gonna stick to it for all days moving forward!