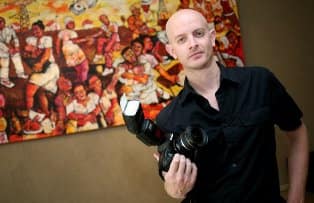 I was born, and raised by my Mom in Cape Town. In my early teens, I was a bit of a surfer boy, listening to Bob Marley and chasing girls. As I got a bit older I became more and more interested in music - especially heavier music. Eventually I sold my surfboard and took up guitar lessons instead. I formed a band with some friends from around the neighborhood. We were pretty bad.? We sounded like a cross between The Sex Pistols and some of the early grunge bands coming out of Seattle.

When I was about fifteen I was sent to live with my Dad in Johannesburg. Apparently I needed some discipline and a Father figure.? I guess the gory Iron Maiden posters and rebellious attitude were the main cause of this. ?But I always did my own thing. I didn?t like being told what to do. I was in trouble with my teachers regularly. Even from a young age I knew I didn?t want to conform to society - get good grades, go to university, get a regular job! No thank you. I barely made it through each year of high school. All I wanted to do was come home and play my guitar, and one day be in a famous band. Maths! What do I need that for? This attitude didn?t go down well with my Dad. He?s a very successful engineer. He told me I needed something to fall back on. He wasn?t wrong, but I didn?t care. I had my dream and I was going to follow it no matter what!

After high school I went straight into the army. I was in the second last call-up for the old National Service. This was like my own personal hell. I hate being told what to do and what to think.? But I got through it and learned a few skills in the process. The experience did make me a better man. Not so much because of the discipline and general army stuff, but because it was such a huge challenge for me. ?I truly believe I went in a boy and came out a man. It didn?t change my perspective on conformity to society. If anything I was more determined than ever to do things the way I wanted to do them.

I was out the army for about a week and I formed a band with my best mate. We found a singer and a drummer and set to work. Most of us worked more than one job at a time, to live and afford the equipment we needed. We played gigs all over Johannesburg. Entered battle of the bands wherever we could. Three of us worked at a bar at the old Randburg Waterfront. On Monday nights a guy called Sean Liebenberg played there. We became friends with him, and one night he invited us on stage to do an unplugged set during his break. While we were playing, Art and Brent from Just Jinger walked in. This was just after they became famous [1997]. They were blown away by our stuff and invited us to open for them at The Roxy in Melville. Talk about right time, right place. It was like a fast track to fame. Before you knew it we had a manager, were getting sponsors and getting booked all over town. Within a year we had three record companies offering us contracts. We chose Sony BMG, and set about recording the album.

Our first single ?Starlight? made it into the top 20 on the 5FM Top 40. Our second single, ironically titled ?Getting Stronger? made it to number 2. Dj Ian F said if it weren?t for U2?s ?Beautiful Day?, we would have made it to number 1 that week.

We got loads of airplay, and did a supporting national tour for our album.? But, despite rave reviews and good exposure, there just wasn?t enough financial support to sustain it full time. There were nights our sound engineer went home with more money than us.? We were peaking at a time when DJ parties were more popular than watching live bands. I had to go back to part-time work to pay the bills.

I got a job working for a small independent Pro photo lab. I really got into photography at this point. I was even the bands official photographer, using tripods and timers to get the shots. I think, because of our financial struggles, the friendship between the band members became a bit strained. I was starting to fall out with the singer in a big way. We were both very stubborn, and wanted to do things differently. This included musical direction, and general business decisions. As he was the main songwriter, he got his way most of the time. This frustrated me. I don?t like being told what to do, especially when it concerned my future and my financial situation.

About one year after recording our album, I left the band with a very heavy heart. I was devastated that it had come to that. We had worked so long and hard, making huge sacrifices along the way. We were very good together, musically, but becoming bitter and resentful as friends. Still to this day, that was the hardest decision I?ve ever made. And I often regret it. If I were then, the person I am today, I would have fought harder to make it work. I would have found ways to keep our friendships strong. I was young then, and have learned a lot about myself, and life in general.

I have learned that the people in your life are the most important. All people. Even the ones I haven?t met yet. It?s the connections we make on this earth that make our lives special, that make us better people, and grow our businesses. I try to treat everyone I meet with respect and dignity, even when it?s not being given in return. Good manners and sincerity go a long way in making lasting friendships and strong business connections.

Today I run my own photography business. I mostly work in the corporate market, the one place I never wanted to be, growing up. I love my job. I meet new people every day. Go to new and exciting places, and get to see into the workings of all kinds of things I never though excised. I?m following a new dream now, one which has endless possibilities. I do miss the music though. The thrill of performing live, and the fun of jamming with friends. Who knows, maybe one day you will hear me play again.

On a personal note:
Mike, we met through a Tweet that screamed of honesty, passion and a truth of who you are and now I'm thrilled to call you my friend. Thank you for sharing in #D500 with me and inviting me into your world of photography and live SA music. I know you have asked me a few times why I wanted you to do the project me interview and my answer is unwavering. I loved every song from Grannysmith in my early days of clubs, tequila and Rocky Street and I also you would have a story to share that reminds us just how incredible it is to live a dream. Everything you touch turns to your version of gold and it a joy to share you story! Mike, thank you for your time, honesty and a trip down memory lane that must be so bitter/sweet!

1. What is your definition of happiness?
Happiness is living in the moment. Living in the present. I believe there are two ways to live your life. You can have a life of ?meaning? ? which requires you to dwell on the past and the future. This rarely brings happiness. The other is to keep your thoughts on right now. Be happy for who you are, your family and friends and the other blessing in your life.

2. If you could have everyone say one thing to themselves every day, what would it be?
Never give up on your dreams. They are always attainable, as long as you keep trying to reach them.

4. What quality do you believe we can never be taught because it is our birth right?
To love

5. Describe the moment when you realised that you could achieve anything?
The moment I truly believed that I could?achieve?my dreams, was the night our band won the battle of the bands at Roxy Rhythm Bar back in 1998. I can clearly remember the feeling on stage. The crowd was going?ballistic. The whole place was just buzzing. I could literally feel the energy in the room. Every pull on my guitar string was connected in some way to the people there. It was like we were all connected by this invisible force. And we were controlling that. Its an unbelievable feeling.

6. What have you always dreamed of being or doing and have you reached that dream?
Since I was about fourteen years old, I dreamed of being a musician. Performing on stage. Going on tours and living the life of a professional musician. I?pursued?this dream until we signed a record deal with Sony BMG in 1999. I really believed that was the start of big things. But being a pro musician in South Africa is very tough. There?isn't?a big enough market. I still had to do part-time jobs to survive. And in the end we could not keep going. So I guess I did not reach the?heights?of the dream. However, this failure could have been overcome. I could have achieved my dream. As a band/team we?weren't?all moving in the same direction. And that was the biggest stumbling block. When your dream depends entirely on the co-operation of others, things can go wrong.

7. When life gets in the way, what do you always remind yourself of?
Life is life. Its part of the journey. It cant be avoided.? Just try to find a balance. Every little thing we do or experience, has value. It makes us who we are.

8. We all have something unique to offer the world, what is yours?
My point of view. But most people are only interested in their own, so it is of very little use to the world.

9. How do you deal with the fears that could potentially hold you back?
To quote Waynes World: ?Live in the now? ? You can?t change the past and the future hasn?t happened yet, so why worry about it.? Do your best everyday.

10. What do you believe we have lost sight of in the world as a whole?
Empathy.

The South African Guide-Dogs Association for the Blind was founded in 1953 by?Gladys Evans?and a?temporary training centre was rented at No 1, Glamorgan Road, Parkwood.after she returned from England with her famous guide dog, Sheena.

This 11 acre property today boasts all the facilities required to train both guide dogs and their blind owners.

To donate, sponsor a puppy or guide dog and find out the many ways you can support this vital cause, please visit the SAGA website.