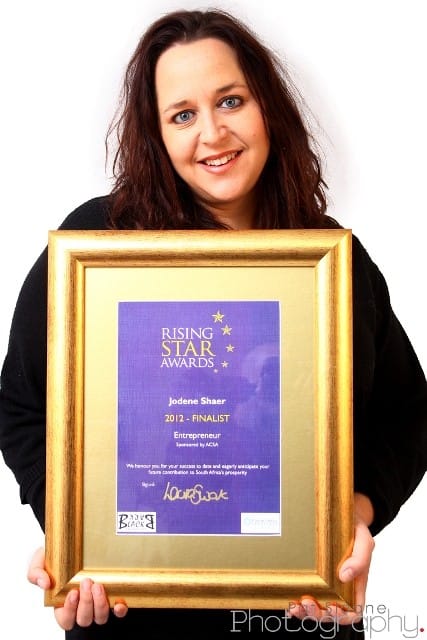 Okay, between us, because we're so close, I'll share with you that I was in my pajamas for this pic. Isn't it amazing what a little foundation, eyeliner and lipstick can do?

Honestly, today I have been a combination of exhausted and excited, which has almost left me dizzy and despite it being way past the end of the working day, I couldn't end it without sharing my very special moment with you.

So last night was the finals of the South African Rising Star Awards ... no, I did'nt win but I sure was a winner!!

The goal of the awards, in the words of the organisers, is:??"The Rising Star Awards have been designed to unearth & recognise these inspirational & passionate individuals who have a capacity for achievement & success - young people who through their work are shaping the future of South Africa with tremendous dedication and energy"

That's me ... I was one of 40 people who did that ... who continues to do that. How could I not feel like a winner. But there's another amazing reason why, by the time that someone else's name was called out, that I had already won. From a few Tweets and a Facebook Status that I did a just hours before the awards began, the messages began to flow. My timeline was filled with the #FollowSA hashtag and the theme was the same throughout. Everyone was telling me that I was already a rising star in their eyes. Wow!!

Between the blogging, creating what #FollowSA is today, finding my place in the social media world & fighting to hang on as an entrepreneur, I can honestly say that I so deserved this moment. I am so touched by every person who supports me, but I also know that you are in my life because I've opened myself up and welcomed you in. There were countless times that I wanted to give up blogging because I imagined every post would be filled with me wallowing in the struggles of a business owner that I lost sight of the fact that one day I would blog about a moment so extraordinary that it would have made every sad blog so worth it ... that's now ... that's today!

My journey would be a fraction of what it is if it weren't for my amazing Lifeology business partner who doubles as my awesome best friend. Thank you for keeping me on the path when I wanted to tumble off it, Greggie! This one's for both of us 😉