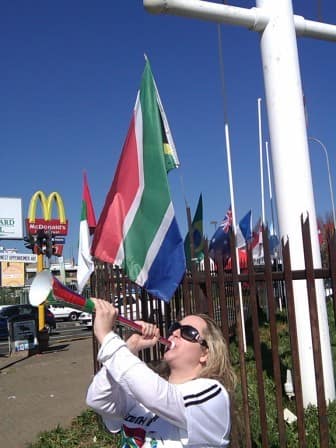 My vuvuzela moment - project me day 159

12 o'clock market the momentous 'vuvuzela moment' where, in true South African form, we joined as one nation and made a hell of a noise. Greggie and I didn't got to hub of Sandton where all the action was happening, but rather chose to take to the streets and be along some random street in the middle of Johannesburg.

Blowing the vuvuzela takes a touch of practice, but one you have the hang of it ... oh boy I felt like I was making the most beautiful noise. As 12 struck, the streets filled with hooting and blowing of vuvuzelas and we all knew that, all at the same time, we were showing the world just how unique we are as a nation.

Then it began ... the first tweet!
My tweet was filled with all the excitement of how proud I am to be South African and how awesome it was to be in the streets. Oh dear ... the rest of the world isn't dealing with us so well.

The rest of the day was about being deleted as a South African Twitterer and warding off shocking comments from Facebook 'friends' around the world. I've been told we are noisy, we ruin the game, we should never have been given the world cup ... our game are?equivalent?to riots. ?A foreigner gave me ?lecture about the black to white ratio of soccer players ... and here we are all united as a nation.

I'm completely overwhelmed with emotion at the moment and had to just tell Greggie not to panic as I burst out crying and think about my dad who's not here to share this historic moment as the proudly South African man that he was.
He created a home environment where we were never tarnished by racism and where we shared a table and food with a number of races who he always called friend!
I don't know if filling the streets with vuvuzelas and showing the world how we unite as the rainbow nation and how beautifully we all love and respect each other would have even surprised my father at all.

He will have said that we were always loud ... I remember growing up with him as MD of a massive butchery and going to the factory where the day would start with mine dancing. I was little and that was loud ... but he threw us into the thick of it all and left us dancing with gumboot dancers before work began while he went to his big office.

He spoke loud and taught us that loud never meant disrespect. He laughed loud and he also cried loud ... and many of those tears were shed for people from this beautiful nation.

It's made me proud to be loud ... to know how to blow the vuvuzela and to show the world that we might seem a little like we are rioting in the streets ... but actually, we are dancing, singing and loving in other in the only way we know how ...