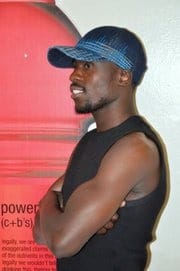 Not without my Patrick - project body week 2

For a girl who hides behind food as the comfort too when things change, it's been one hell of a week. There have been so many changes and umpteen reasons to eat.

Then there are the reasons not to and most of them come in the form of someone else. The someones like my mother and Greggie who have had to deal with the first few insecure dinners. Then there are my friends who just cheer me on with so much love. My Twitter family, especially Dezy D who I don't know how to thank for the cheerleading and awesome messages. Slowly I will thank all my sponsors and introduce new ones, because they have been so incredible too.

There is something about taking on your greatest fears with the world watching and cheering on. I have tried to tackle this weight issue for as long as I can remember, but all of a sudden there's something very different about the space I'm in and there is one fundamental person that I am blessed to have by my side.

I was cleared for gym months ago ... like February already, and told that water?aerobics?would be best for me. I was super brave and got the number of the trainer and called him almost immediately. On the other end of the phone was a friendly voice that I felt I hand know for years and he told me that he was waiting for me to set up a complimentary private session to help me and show me that I would be just fine in the water. I put down the phone and never called back ... until I had finally announced 'project body' and knew where the one downfall would be.

As the phone rang, I prepared myself for that conversation that began with, 'you won't remember me ...', but I never go the chance because Patrick Tendani had been waiting for my call. The enthusiasm with which he jumped at supporting me as a partner of 'project body' should have been my first warning sigh.

Holy moly ... I had images of a few water aerobics classes that looked a little more like?synchronised swimming than what I ended up diving into (almost literally). I challenge anyone to take on water aerobics! It's tough dude and I keep on telling Patrick that I'm gonna drown (or die) but I keep fighting on. I know that if it weren't for his support, special messages that get me to gym and praise me once I've gotten home after an hour of tough stuff and cheering me on from the sidelines, that I would be in a pile of tears and hating the idea of 'project body' already.

I know my lazy ass attitude about getting up in the morning and most of it is because I sleep far too late, but when the wake up call is 5:20 am and it's in the pool at 6am ... trust me, this butt has been in bed early. Once again, thanks to those 'waky waky' messages that I receive before the birds are chirping and the, 'you can do it! cheers, I have had an incredible first week of 'project body'.

Patrick's support ?when I stood on that scale and measured that fat was beyond supportive that by the time I had to show the numbers to the world, I didn't feel as though I was going to slit my wrists. But it was his cheers and applause when I lost 1. 4 kilograms in this week that makes me feel like the most supported girl in the world.

Food hasn't been as tough as I thought, but that's because of all the cheering and asking 'how's the food Jo?' ...
I made it through a lavish Yule dinner and learned a special lesson. I watched my day and kept the majority of my calories for the evening. Then, I had much smaller helpings and no one even really noticed. I savoured everything but didn't indulge in anything ... and the next day I was in the pool again.

My body is loving the journey, despite finding gym 100 times tougher than I ever would have imagined. My theory stands true though ... all you need is one person to believe in you ... and I have Patrick!

4 comments on “Not without my Patrick - project body week 2”