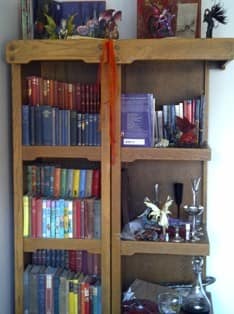 Most of my fret about boxes has been my concern that dragons and fairies couldn't breathe with the amount of bubble wrap they were smothered in. The other concern is that I couldn't breathe until I knew the made a safe trip to the other side (no, not other world, just to the new house) and that they were safely removed from the bubble wrap. That's not as simple as it sounds seeing as though the bubble wrap was taped about 5 times around and needed to be surgically removed.

I chose to ignore the fact that I saw the movers drop a box as they were piling them 5 high and convinced myself that it wasn't one with my precious dragons, fairies or priceless alter goblets and trinkets. So yesterday had an edge of stress.

It's funny how that the time when my brother kicked into the most compassionate of modes.
Before we even got to dragons, he was making cunning plans and cutting boxes into pieces to be able to stagger my books so that I could put more out. You are looking at about 30% of the books. What to do with the rest will slowly be tackled during the week, but my most treasured ones are out. I think one day I have to post some of my most prized ones ... like an original AA Milne story of Pooh Corner, the entire set of Jane Austin, In cold blood, at least 5 Charles Dickens and now I'm starting to collect Nancy Drew and the Hardy Boys. I have two original Harry Potters and now I think I need to scout around for the set as that will be valuable one day. I always joke with my family that someone is going to curse me when I'm gone ... it's a hell of a lot of books to pack up! At this moment I am already trying to encourage the book passion with my nephews so that someone will keep them and not give them to an old second hand store in years to come. Well, I'm hoping that when it's time to leave this happy earth, my 1900 Jane Eyre will be worth something more than being tossed back into an old book store.

Anyway ... I always get a little carried away by these books and the point is that it took an entire day and the gentle patience (yes, it's that rare) of my brother to discover that everything arrived at their new home safe and sound.

I'm a little surprised everything stayed in one piece with a set of twins, aged 5 and a bit, dashing around the house like cowboys. How to teach them that aunty Jo's room is off limits is going to be an interesting one. I also made a decision not to hide my 'other' books in a cupboard and that it's time for everyone around me to adjust to what I do. Engineers have engineering books around and psychologists have their textbooks too, so why must I pack my tantra and sex books away? So they are neatly on the bottom shelf next to the wiccan encyclopedia of all things ... I found that nice and appropriate.

My room is an interesting world to step into now that I think about it. Dragons, fairies, wands, crystals, old books and then a burst of girlie perfumes, pretty necklaces, sparkling rings and bracelets. Other people get hand creams and cup of soup as sample sachets ... well you can just imagine what I get in my industry. So there are boxes of lubes and condoms that have all been neatly sorted (expiry date checked and the ego put to rest that I am not as on the shelf as I thought right now). The giggle is that they are in an old wooden box that I'm sure was intended for something more ... um ... less surprising if opened. Don't panic, children won't be walking down the passage going "aunty Jo, what's this?' with a 'zzzzzzzz' sound trailing with them. Those are all stashed away in not to be found places, but if I had to hide everything I would be living in a secret chamber and only come out for meals.

It's refreshing to look back at who I was when I moved back to my mom's house nearly two ago and how I hid everything away. How proud I have become of my beliefs, belongings, career path and choices. It's amazing to breath and see the great gifts of 'project me' that have paved the way to me being ... me!