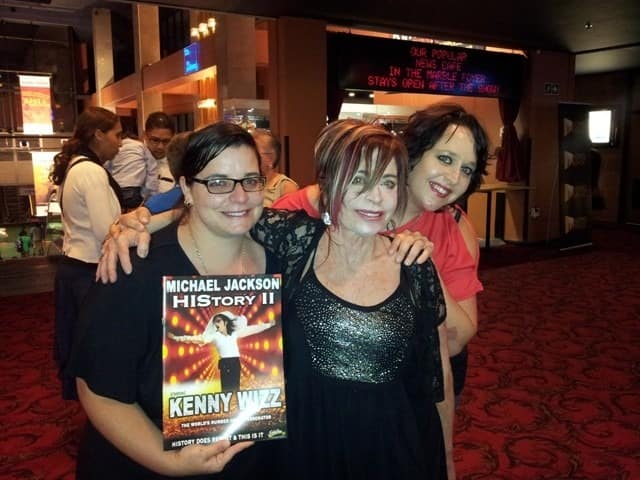 Relive your History with Michael Jackson at the Joburg Theatre

Maybe it's just me who thinks that everyone has some kind of history with Michael Jackson. Maybe it's ?because I've been lucky to have very special memories to hold onto when I hear his music today. I would find it hard to believe that many people could go through life not having been caught wearing a white glove, letting their white socks show or trying to do the moonwalk. If they are out there ... then I don't think it's too late to create some history with the King of POP!

It's back to another year of making my own kind of magic and there was no better way to start than heading back to the one place I truly love ... the threate! Opening night at Joburg Theatre is always a treat, but as I drove through for the Michael Jackson History II show by the amazing Kenny Wizz, I could feel the butterflies.

You see, I didn't grow up truly being a fan of Micheal Jackson. No, it's more accurate to say that in my world, no matter how big a fan you where, you were never truly a fan like my little sis. She's one of those people that most people call crazy. One of those people who make the news for camping outside of hotels room and traveling around the world to see him perform. That's my history with Michael Jackson and so I knew an emotional night of memories would unfold.

I was awe struck. I know Kenny has been doing tribute shows, dressed up like Michael Jackson, for a while but this was my first hand experience at seeing him perform live. Incredible is truly the only word to describe this production and I wouldn't tell anyone had they?permission to miss it.

Being so awe-struck let me hold the emotions back, but there my mom and sisters sat with tears running throughout the whole show. Not over dramatic in my world ... not when we have memories like this ...

Growing up, sibling rivalry is always rough. We aren't one of those families who can say that we got along fabulously as kids. Little is and me, well we truly had rocky times and we wouldn't have called each other friends for years and years.

Mom, little sis and me waiting for Kenny Wizz to sign her program

Then life changed and through finding comfort and understanding in her music, little sis became that fan. He loved SA and every time he was here a friend of hers (actually someone who worked for Michael who she managed to befriend because she's crafty that way) would tell her where he would be and mom, little sis and I would jump in the car. We did crazy things together, like drive an hour and half and stay over at SA's famous Sun City just to catch glimpses of him. I would catch her when she fainted and ?we would listen to Michael Jackson the whole way home to reality.

Then there's the other side of the music that carried me through or gave me reality checks that I never expected in my life. Like the time little sis traveled to see him in New York and overslept because of a fun night out at his concert. That date was 9.11 ... she was supposed to have been in the world trade centre ... I listened to Michael Jackson so much then. Until she was safely out of New York. It took a few says and she truly was stranded and alone. I can't being to imagine how much she listened to him but I know songs like "you are not alone" carried me through until she returned back to London where she lived then.

Then there's the time that I had to choose a song. A song that spoke of the death of my best friend. He was taken far too soon from my life, in 2001 and he will have "gone too soon".

There are so many more memories of "man in the mirror", "smile" and "she's out of my life" that I could talk about ... but I'm hoping you'll head off and remember your own. Take in a brilliant stage performance and tribute show that I know Michael Jackson is so damn proud of. Remember the unique outfits, Michael moved and moonwalk and be moved by a song or a multitude of moments that creates your HISTORY through the music of Michael Jackson.