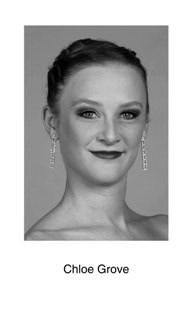 Chlo? Grov? began ballet at the age of four and age eight, enrolled at the Pro Arte Academy and later joined Pro Arte High School for the Performing Arts. At eleven she was awarded first prize in the Satin Slipper Ballet Competition. She obtained her Intermediate level examinations in both RAD and Cecchetti methods having achieved Honours for all her Cecchetti exams.

During Grade 11, she left Pro Arte to train intensively with Paula Olivier. She also took class at the Pretoria Technikon with Principal dancer Irina Zyrianova.

In 1997, Ms Grov? was the youngest semi-finalist in the Sanlam International Competition. She successfully auditioned for the State Theatre Ballet Company in May 1997, having just turned 17.
She was promoted to Senior Corps de ballet in April 1999. Her featured roles with STB included Pas de Fiance?s (Swan Lake), Pas de Cinq (Papillon), Fairy Winter (Cinderella), 2nd Shadow variation and one of Four Bayad?res (La Bayad?re), Hermia (The Dream) and Ludmilla (The Merry Widow).

After the closure of the State Theatre in June 2000, she continued with her daily classes and worked with various choreographers for corporate events including the National Aids Benefit. In November and December 2000, she performed in the Malan / Beukes / MacDonald version of The Nutcracker and danced the Arabian Dance in Act 11.

Ms Grov? joined The South African Ballet Theatre making her debut in the role of Bathilde and Queen of the Wilis in Giselle whilst on tour with the company in Port Elizabeth in 2001. Other roles for SABT have included Mercedes in Carmen, Lead Sylph in La Sylphide, Big Swans, Pas de Trois, Grand Valse Lady and Pas de Fianc?es in Swan Lake, Five Ladies in Who Cares?, Blue pas de deux in Kopano, Teressina Solo in Napoli Act 3, Cavaleria Rusticana Pas de deux, Pas de Cinq in Papillon, Granny Wanda in Rock-a-Tutu, Pas de Six and Madam Flora in La Traviata, Winter Fairy in Cinderella, Arabian Dance, Lead Mirleton Snow Queen and the Sugar Plum Fairy in The Nutcracker ,Prayer in Coppelia and Lilac Fairy, Woodland Glade Fairy and Fairly of The Golden Vine in The Sleeping Beauty .

In November 2006 she was promoted to Senior Soloist having performed in the company?s seasons of Copp?lia, Hamlet and Triple Bill. Earlier that year, Ms Grov? was one of two dancers chosen to travel to Sweden to perform with The Royal Swedish Ballet in Natalia Makarova?s production of La Bayad?re.

Ms Grov? appeared as a Harlot, Juliet?s friend, Lady Capulet and Troubador in Romeo & Juliet in March 2007 In July 2007, Ms Grove made her debut in the Mazurka in Les Sylphides and as a Girlfriend and Lead Dryad in Don Quixote. She performed the Lead Grand Valse Lady, Pas de Trois, Big Swan and The Russian Dance in Swan Lake during the Company?s August / September season 2007. Chlo? spent November and December appearing in The SABT?s annual season of The Nutcracker and participated in the inaugural South African International Ballet Competition in Cape Town.

In April 2008, Ms Grov? was the recipient of the prestigious Madge Cade Award presented to her in recognition of her commitment to the Company which goes over and above the call of duty. That same year she toured with a mixed bill to Knysna to raise funds along with The SABT for Hospice as well as to The National Arts Festival in Grahamstown for a sold-out season of Don Quixote.

In March 2009 she appeared in SABT?s Cinderella choreographed by Veronica Paeper followed by The Cape Town City Ballet?s version of the same ballet in April 2009.
She performed the roles of Prayer in Copp?lia at the Promusica Theatre in July followed by Myrthe in FNB?s Giselle at the Joburg Theatre in September.

Ms Grove appeared in Janice Honeyman?s pantomime Pinocchio on the Mandela stage at the Joburg Theatre which ended in January 2010.

In 2010, she appeared in ?Swan Lake? as well as in ?Carmen-the Ballet? at the Joburg Theatre. She also toured to George and Knysna to raise funds for Hospice. The role of the Christmas Tree Fairy was created for Chlo? for the year-end season of ?The Nutcracker? at the SA State Theatre.

She re-created the role for a sold-out season at the Sand du Plessis Theatre in Bloemfontein in March 2011 and also appeared in ?Romeo & Juliet? (Lady Capulet) and ?The Sleeping Beauty? (Lilac Fairy and Crystal Fountain Fairy).

Chloe tells her project me story:

What is your definition of happiness?
Happiness is a state of mind that resides within oneself and can be achieved anywhere.

If you could have everyone say one thing to themselves every day, what would it be?
I can! I will! If you dream it, you can do it!

We all have that moment when we need someone to believe in us. Who is that person for you and why?
My mother and my husband. Their honest and constructive opinions really matter to me and they have always been there when I need affirmation.

What quality do you believe we can never be taught because it is our birth right?
Instinct and integrity.

Describe the moment when you realised that you could achieve anything?
At the age of seventeen, I achieved my ultimate dream of being accepted into a professional ballet company. Performing for PACT Ballet, and since 2001, for The South African Ballet Theatre was an affirmation of all my hard work.

How do you deal with the fears that could potentially hold you back?
Define them (Are they real or not), face them and work on them.

What have you always dreamed of being or doing and have you reached that dream?
To be a professional ballet dancer and perform to live audiences. This was a dream I had from the age of three and I have definitely achieved this! The South African Ballet Theatre performs locally and internationally and we aim to take the magic of ballet to as many communities as possible.

When life gets in the way, what do you always remind yourself of?
Of what my dream was to begin with. Each obstacle can be used as a learning curve and I need to figure out what to take away from it in order to learn from it.

We all have something unique to offer the world, what is yours?
The way I am able to express myself through dance. I also choose to share kindness with the world.

What do you believe we have lost sight of in the world as a whole?
Compassion and a sense of community. The whole is greater than the sum of its parts. The whole universe is inter-connected and we are all part of creation and it is our moral duty to conserve what we have.