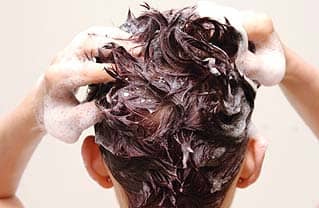 Shampoo and other scary things - project me day 413

I've never denied being a little wacky. Seriously, a person who blogs every day of their lives has to be a?sandwich?short of a picnic basket. Yes, I'm talking to all of you daily bloggers. Sometimes my wackiness is a fun distraction for my brain that works too hard and other times it's genuine unhealthy thoughts. Mastering the art of 'project me' is finding my way of giggling at the latter and making it the brains distraction anyway.

What the hell am I on about? Sometimes I wonder myself. However, this particular chaos is caused by the exciting buildup to my change in hair colour (which I totally love) and the unexpected bill one my hair was done. I am a believer that you have to spend money to make it., but holy cow. Gulp ... it was basically all my grocery and entertainment money for the month. Granted, I'm not a lavish spender (that's a valid point for a dating site me thinks) and I never regret money spent, BUT I'm too scared to wash my hair.
It's ok ... you can roll your eyes like everyone else or burst out laughing like the rest but this chick is making this colour laaaaaaaaaaaaaaast! So while distracting my brain from the really scary things (which I will get to now) I have been plotting and scheming how to get away with washing my hair once a week. I kid you not ... my brain does this. It's a plan sure to fail but it's comforting my ego that is living on a shoestring for the remainder of the month. If my plan were to work I'm thinking I could eat well for the months of March and April 😉

Day 1 ... wash hair and wear it down.
Day 2 ... I could wing another day down or hold it all together with a clamp
Day 3 ...?definitely another clamp day
Day 4 ... pony tail
Day 5 ... scraped back bun
Day 6 ... scraped back super greasy bun
Your thoughts?
You're right ... let's put my brain to better use, like taking my career to another level.

It's been playing on my mind for so long that I'm not sitting on something?insignificant?with my talents but the 'how' of it all has been freaking me out and putting on the brakes. Thanks to my incredible friends, followers and family I have had no choice but to get over my crap and realise that it's time to do something ... anything ... as shit scared as I am. I'll tell you why I'm afraid before you even get a chance to ask. Because whenever I think of making it out there as a blogger or speaker I think of the millions of others and feel like a tiny little guppy in a very big ocean. That's why.

I may as well stop 'project me' right now if I give into those fears and so I decided to do what I've been talking about for far too long ... open 'project me' up to the world. Let others tell their story and watch it snowball because I would much rather hear a story from the everyday person on the street than the?millionaire or guru. It's always been my plan and I don't know what I've been waiting for ... so in a few hours I will be launching my first 'Your Project Me Story'.
I posted an event on Facebook ... which my dearest followers don't all read properly but that's besides the point ... and opened it up to everyone around the world to tell a 'project me' story of their own. My gesture in return is to sponsor that page with a product/brand/charity or tool to market yourself. Of course it was an anxious day ... waiting and wondering if anyone would reply. Wow ... the response was overwhelming and I am so excited to share some magical 'project me' stories through the months that follow.

The day got bigger with my confirmation of the first 'project me interview' with an incredible social networking business man who has developed one of the best social networking tools that I feel South Africa has to offer. That's a few days away, but in the meantime I'm on the hunt for 'the heroes of business/sport/entertainment/charity/awareness and care the world over to tell their stories in the newly launched section of 'project me' too. Once again, I held my breath waiting for one of my heroes to respond to me and when I got my, "I would be honoured" I felt the snowball effect begin (in a good way).

This morning I'm still more afraid of washing all the colour out of my hair than posting my first 'Your Project Me Story' and that's a good sign because I know better than anyone else that fear is the greatest fuel of all. So it's posting blog, sending interview questions to the first of many heroes and then off to wash this greasy, tangled but very brightly coloured hair.

I hope your day is just as scary 😉