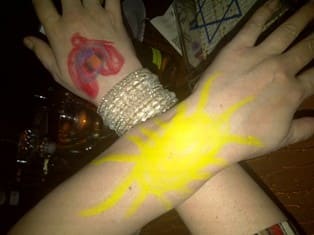 There is something that I am trying to figure out about my way of thinking that might be a little too?unconscious?at the moment. Yes, I do things like this and don't think I can ever be faulted for thinking too much ... except about the distracting things like money, which road to choose and boys. The other thinking is what creates on of Lifeology's greatest lessons in the mix of courage, consciousness and a sense of humour ... that thing called consciousness. The silent observer of the self.

I don't know where I would be without it because the past couple of days have been a fine line between the cup half full and the cup half empty. The only deciding factor is the consciousness to choose and I chose for it to be full. Since Sunday I have been chatting to a not-so-stranger who responded to a tweet where I was saying how very sad the word 'settle' is. He double checked that I meant 'settle for' and I agreed. Long story short ... he thinks I have a refreshing attitude towards life. On some days I need those reassurances from a not-so-stranger and on other days I figure that out all by myself.

Yesterday was genuine swing between highs and lows that had that half cup swishing around like it was on the rough open seas. Extraordinary business opportunities battered around by extreme financial pressure. Unexplainable moments of creative genius smacked around by the realities of time frames.
It was the first night of the Jewish festival of passover ... and this pagan girl loves the traditions but battles through the service that keeps repeating how people were slain by the mighty God. I never question what anyone believes but I just choose to believe different and expect that no one questions what I believe either.
My poor mom is horribly sick with flu, yet at the same time we were all waiting in anticipation for her cooking.
My family is magical at times like this, yet there is always the hovering of a little sibling rivalry.
The room is full with love and laughter yet it feels completely empty without the bellowing voice of my father.

And then little boys arrive with face painting pens and I remember why we are on this rocky ocean of life in the first place. A sedar table turned into human canvasses where everyone turned into giggling children as we were scribbled on with a unique picture from each precious little twin. Not bad drawing for a 5 year old ... or is that just a super proud aunty?

I could say my day was crappy, but I could also say it was one of the most inspiring days I have had in years. I could look at the mess that a little boy created all over my skin or I could say that I was painted with a masterpiece.

But I do believe that we will always have the power to colour it beautiful ...