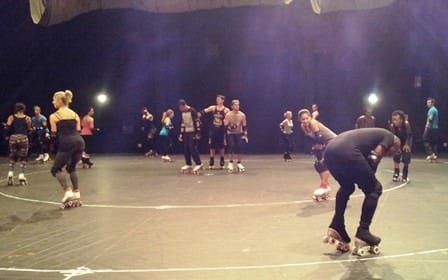 Sitting in front of a stage, taking in a performance that has been rehearsed dozens of times is one of my great joys. Live stage performances have played (excuse the pun) a very special role in my life as I have grown to be a regular new media blogger at the Joburg Theatre. There is one thing that thrills me more than being in the audience though, and that's getting to walk the hallways and climb the stairs that open a whole new world backstage.

Sneaking past room and peaking into open doors with racks of wigs and clothes. Walking through long passages lined with signed posters that speak of a rich history of talented souls that walked the corridors and then emerging behind the stage where bits of set pieces wait in anticipation to find their rightful space in the spotlight. And then a massive door swings open and there are bodies everywhere.

What a thrill to be led into the world of one of the greatest stage production moments South Africa is going to see. Starlight Express might not have been seen by everybody, but there's very slim chance that anyone out there doesn't know of Andrew Lloyd Webber's production with an entire cast on roller skates. I get the feeling I'm going to be talking about this a lot as the months draw nearer but in the meantime it was just a glimpse at the start of rehearsals for this amazingly brave South African cast.

The majority of them haven't been on skates before, or at least since the childhood days of rolling around for aimless fun. But now, there are all strapped in and have to acts, sing and ... well ... skate!!
What an inspiring mixture of passion and passion!!!

It's early days and the cast are truly in the midst of finding their feet and sometimes staying on them, but through the hours of rehearsals, with heavy skates on their feet, there they are, bringing an incredible dream for themselves and for the theatre to life.

In a few months time, I know I will return backstage and these fumbling, bruised and somewhat overwhelmed individuals will have emerged into STARS filled with LIGHT and on the EXPRESS track to one mind blowing show that I wouldn't dare miss. No matter if you have had the joy of watching Starlight Express anywhere else in the world ... this South African adaptation directed by the amazingly talented Janice Honeyman is going to be nothing like we've ever seen before.

With the leads David Schlachter (Rusty) and Carly Graeme (Pearl)