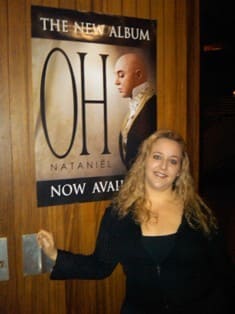 I'm still working on being the blogger that the celebs want their pic with ... so a poster it?

I have always had the strangest relationship with the Afrikaans language. I considered it to be my least favourite subject in school, which is an absolute lie because everyone knows that maths takes that award hands down.

I say that I can't speak a word of it, but that's only because ?I think that I sound like a fool speaking the language with my high pitched girlie voice. Around my parts I could be?referred?to as a kugel and we really don't sound good breaking into the Afrikaans at all.

I'm fast learning that Afrikaans boys are very cute, very gentleman like and very a whole lot of other things, so best I make haste and become a little more bilingual.

With all this in mind, I have always adored Nataniel, but have looked at the ticket prices and weighed up the fact that I would understand about 10% of his shows because he is so Afrikaans ... and I've missed far too many.

My back hasn't been kind to me. Well, I haven't been kind to my back and I was contemplating not going, with my only excuse being that this girl wouldn't understand a word of what was going. Because this year is all about having fun and being in the moment, I was kind to my back the whole day and prepared to experience my first live performance by this amazing entertainer.

I don't think 'wow' even begins to describe the night I had. Once a year Nataniel puts on a full show adorned with?orchestra, his dynamic signature costumes and a dazzling show ... tonight wasn't that. Tonight it was just him, on a stage, with one piano. We sat behind his pianist, Charl du Plessis and just watched his body bounce with laughter as Nataniel entertained us all. You can see how the special bond they have literally oozes into their audience.

He's a scream. He is one of the most incredible storytellers I've ever had the?privilege to listen to ... and here's the kicker ... I got about 80% of it. No, not because it was in English, but because I totally underestimate my ability to understand the language. I'm not that bad ... I pretend like I can sort of make out half of a sentence, meanwhile I can pretty much get through much more of it. I was so chuffed at myself. I had to only stare at Greggie with a blank look on my face once and he did a quick translation. I think I skipped a laugh about 5 or 6 times while trying to?fathom?why everyone was laughing at the punchline and I made up my own translation and laughed hysterically anyway.

The combination of moving between song and story was incredible and in true Jodene style, I couldn't help but shed a tear or two. His songs were so moving and even the ones I have heard countless times sounded like the first time.
I more Jodene style, I was so jealous of his totally?glitzy?jackets and shirts and was so totally contemplating a reason why I would ever need to be dressed in such bedazzlement. Don't panic ... I'm thinking up an excuse if it kills me.

As for 'project me' ... I'm thinking that just watching someone have the ability to catch the attention of audience by doing what he loves best, reminds me that I don't have to do anything more than carry on living my passion each and every day.