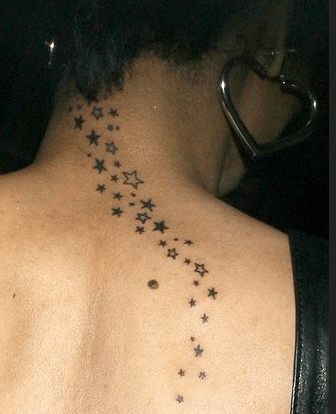 It's truly one of the best decisions I ever made. I adore my tattoo and get stopped often by people asking to take a pic of it or just comment on it.

I didn't do it for they hype. I truly did it as a symbol of the shift that I saw in myself and the more I discovered the power of being a woman and my strong connection to the moon and life, the more I settled into the desire to have the symbol with me wherever I go.

Most of you have seen it over and over, but for any newcomers ... here is my tat of the moon goddess:

There is another side of the tale though ...

Far too many people ask me if I'm a netball player. To the great amusement of my bestie, Greggie, but to the shock and horror that I have to deal with each time. I've been?contemplating rectifying any kind of confusion for a while now and I keep putting it off. I mainly blame money, but I also think that a part of me hasn't wanted to go to over the top with it.

Well, I think that's already too late. I have a busty woman, double the size of the average tat ... so why not finish it off with the distinguishing factor. She holding the moon ... a symbol that means so much to me.

Hearing the last person ask me if it was a netball pushed me way over the edge and luckily the timing was ideal, thanks to Rihanna's sexy addition!!

I'm going to wrap the stars from above the moon, through her arms and let the spray of stars fade away behind her dress.

Now I can't wait to do it ... money shmoney!!! Watch this space because the new, single, improved me is itching to star up my very special tattoo!