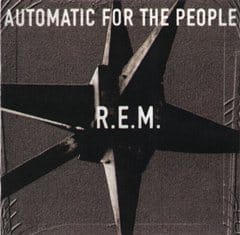 News of celebs and musos flow through my Twitter timeline all day and most of the time it doesn't have impact at all. If you know me the you will know that I'm a South African girl who loves Country music and we don't get much news about it here. I wouldn't be able to tell you what was playing on the radio at the moment, but it wasn't always like that.

We grew up doing a lot of family things and one of the big ones was chilling by the pool listening to the top 20 on the weekend. I remember it as clear as day because I used to sit with my little tape recorder and wait patiently for my favourite songs. I did the same with the top of the pops music video shows ... and song I waited for and listened to on repeat was losing my religion.

All their great stuff has been recorded and it's frozen in time, but I still had a moment of sadness and a moment of happiness reflecting back on my personal journey with R.E.M. Some songs I just loved but others carry meaning for me that wrench at my heart or make me burst out into joyous rapture and I wanted to share the thoughts that rambled through my mind as I reflected on my journey with R.E.M.

Some of my faves: "Everyday is yours to win", "accelerate", "at my most beautiful", "gardening at night", "imitation of life", "leaving New York", "radio song", "stand", "the one I love", "the sidewinder sleeps tonight", "what's the frequency Kenneth" and "walk unafraid".

But then there are the other songs that tell stories of times in my life that I will just never forget:

"It's the end of the world as we know it, and I feel fine" ... I had just matriculated and it was a whole new world of being all grown up. I didn't want to do anything after school because I was such a poor student and I think I was too frozen to make a choice just because I was programmed not to do well. This song sat on repeat while I?acclimatised to the reality that I had to do something ... I had to choose to be someone!

"Losing my religion" ... I did all the right Jewish things for the longest time but I remember questioning so much by the time I was already 6 years old. The last thing I ever wanted to do was upset or offend my parents and it was the tiniest steps that scared me the most. My first real taste of stepping outside of the religion was pretty much inline with this song and I remember analysing the words like crazy hoping I would find permission to take the first steps to being my own person and shaking off all fears and guilt ... I still turn to this song at times!

"Man on the Moon" ... I hope that by now you know my love for the moon ... so it was as simple as being crazy over a song that had anything to do with the moon. I have to say that this is one of my best for the oddest and most simple reason.

"Nightswimming" ... I survived working the corporate world for one year and I hated every day of it. The only thing that kept me going was the fact that ?I had a radio in my office and I could escape into music for a while. This song was all over the radio at the time and I used to stop working (or pretend to be working) while I would hum along in my head for a little sanity ... pretending I was in a far away place ... nightswimming!

"Everybody Hurts" ... I listened to this song in November 1995 on the day we used it as a tribute to the death of four friends who all lost their lives in car accidents within the span of a month. One young mother, two sisters and a dear high school friend. It tore fear and confusion through all of our lives and as friends we struggled to be in our early 20's and so riddled with death. Some people used the song to comfort them, but I just couldn't handle listening to it. I would switch the radio off, walk out the room and do anything not to have to face the fear of just how mortal we are. It took me a good few years to pull myself together but never does a time go by, that I don't think of burying one friend after the other...