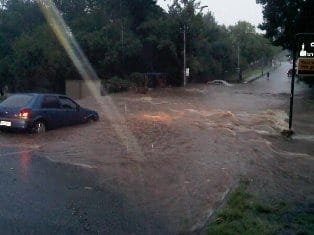 Thava: From sponsor to hero - project me day 450

Like the usual chaos of life isn't enough, today I am sitting here a little (crap ... a lot frazzled) and feeling very much like it's deer in the headlights moments on after the other. Before I even begin the tales of woe, I have to say that I've just had ice cream, a very positive?conversation?with Greggie and good laugh about life. Now that we can put the?positivity out the way, I have to say: "Good gracious, it's been a crappy past 24 hours.

Johannesburg is famous for our storms filled with huge crashes of thunder and lighting that cracks for miles across the sky. Most of the time we carry on regardless and a lot of us aren't even prepared with umbrella.
I don't know at which point I realised that this was no usual Jozi storm. It might have been when I started unplugging all electrical equipment or when I contemplated sitting under the office table. When I was too scared to pee in case the toilet got struck and ended up lying on the bed with kitty taking care of me, I knew this storm meant business. Before all the chaos had even struck I was contemplating moving dinner with very dear friends.
Truth is, because of all of the building around us, the drains are blocked and I kinda couldn't walk downstairs and out of my front door without getting drenched.

You know that phone call that you dread? I think I said the exact same thing when my nephew got knocked over. Well here we go again. This time it was my petrified little sis who had driven home in the storm and hit a dip in the road that had turned into a river. It's one of those things that you just don't see until you are in it and by the time my mother held out the phone to me and asked for help, my sister was trapped in the middle of a river consuming her car with water.
Everything is about me ... right? So then I have to pride myself for keeping her as calm as possible and guiding her out of the situation ... her, not her car.

Just above her was Thava, my very special Indian restaurant who is usually a sponsor that I take my friends to to fill a belly. Yesterday the entire staff of the restaurant turned into my rescue team and I don't quite know how to thanks them.
They were out there in the rain, comforting her and taking her to the safety of the restaurant. My brother tells me that they had her wrapped in sheets (it must have been table clothes) while they dried her jacket by the open fire in the kitchen.
The team at Thava have never managed to do enough for me and I thought it was incredible when they sent me food when I couldn't walk thanks to my herniated disk, but this moment captured my heart.
My sister arrived home semi dry, warmed up from extra strong coffee and with bags of food to feed the family.

I never ended up going to dinner but that was thanks to a second little crisis. By the time I called Greggie he was just as distressed. He was describing the mayhem on the roads and in his own little world. Thanks to flooding roads throughout Jozi, Greggie's electricals in the car had gotten wet and nothing was functioning with the car misting up and the surrounding roads blocking him from making his way home, with warning messages with the car telling him to switch off the engine.

Everyone focuses on the victim in a point of crisis, but you have no idea what it's like being helpless when people you love are amidst danger and chaos. You can't call every 2 minutes to check they are safe and a lot of it goes down to pure faith and a damn huge bout of bravery.
Of course,while waiting for word that both Greggie and little sis were safe, the electricity went out. Well that ended up sucking and while mom scrounged for candles I scrounged for chocolate ... both were found.

I don't like to admit that I'm stuck in the midst of the collective way of thinking or doing things but I can't shy away from the cliche saying: when it rains, it pours.
Moving is hell as it is. My family are going in three different directions with this move. Money is freaking tight in the business and super tight personally ... and then it genuinely begins to pour!

To the staff and friends at Thava, as you stated yesterday ... in times of need, we are all family. On behalf of my mother, myself and my family, I extended an abundant thank you for going to the rescue of my sister in more ways than one. Bless each of you for your love and care.

Here is a personal note from my little sis:
I would like to extend my sincere thanks to Thava Norwood for being there for me in comfort when my car was almost washed away during the flash floods. Thank you for saving my car and putting it in the safety of your premises and making sure that, after the shock of the incident, you took care of me and gave me a warm meal and something hot to drink. You were all a great help and comfort to me. Thank you!