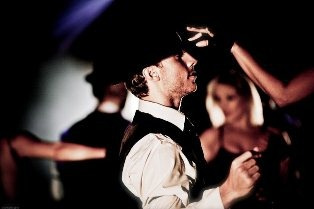 The life of a dancer: Gary Max Wright tells his project me story

Gary Max Wright was born in Liverpool and started dancing at the age of Ten in a local dance school. He trained in all styles of dance such as Disco, Freestyle, Jazz, Ballet, Ballroom and Latin American.

He spent much of his spare time working hard, training and competing.?With much support from his dance teacher Margaret Redmond he quickly established himself as one of the top Ballroom and Latin American Junior Dancers in England which gained him a place representing England in the Great British Junior Team at the British Open to the World Championships held in the famous Tower Ballroom, Blackpool.

2006 saw him taking part in the highly acclaimed production of Simply Ballroom with Lionel Blair were he did an extensive tour in the UK and also South Africa, Dubai followed by Gary making his first West End debut at the Theatre Royal Drury Lane . He then topped off his amazing year by performing in the Qdos pantomime, Cinderella in Hull. This was one of the best-selling pantomimes Hull New Theatre has seen to date. Not only did he get a chance to work with the Chuckle Brothers but he also understudied one of the Main roles.

In 2007 and 2008 Gary returned back to Simply Ballroom to do yet again a very successful tour which also included two American tours which gave him the opportunity to work with the legendary Miss Debbie Reynolds.

2009 saw him appearing in 'Cheek to Cheek' with Anton du Beke and Erin Boag in the amazing London Coliseum and then immediately followed by a brand new Latin American Show called 'Latin Fever' with Strictly Come Dancing stars Darren Bennet and Lilia Kopylova at the Peacock Theatre London.

2010 Gary also Performed on Broadway with the hugely successful Dance Show Burn The Floor followed by London's West-End at the Shaftesbury Theatre in 2011.

On a personal note:?Gary, it's been a joy spending inspirational moments with you and watching the passion with which you dance and live. I wish you health and happiness with each move you make and hope we keep in touch because I'm not done watching you dance yet! Best of luck for opening night at Perth tonight and for the rest of the Burn the Floor tour.
Thank you for sharing your project me story with myself and my readers. You are an inspiration for anyone who has the power to dream:

What is your definition of happiness?
Happiness for me is having a loving Family and Friends who are always there for you. As long as i have that I?ll always be Happy. It?s not about materialistic things at all.

If you could have everyone say one thing to themselves every day, what would it be?
Be Happy with yourself! PMA Positive,Mental,Attitude that?s a saying me and my Friend on Tour say to ourselves if we feel a little low. Everyone from time to time gets a little down you just have to turn that Frown upside down ha ha!

We all need someone to believe in us. Who is that person for you and why?
For me it?s my Family i have such a good Relationship especially with my Mum and Nan and as long as they believe in me that?s all that matters. They believed in me when i first started to Dance at 10 years of age and now look at me.

What quality do you believe we can never be taught because it is our birth right?
I believe every person has different qualities that?s what makes people special and the way you are brought up tends to mould people into what they are. For example Different experiences in life. For me i have experienced things from a Young age i was travelling on a plane at 11 on my own for my Dancing and had to grow up a little quicker than others my Age.

Describe the moment when you realised that you could achieve anything?
I think because I?ve Danced since i was 10 in Competitions in Latin and Ballroom and been very successful i kinda grew in Confidence and then by the Time i was 21 i made practically every U21 Latin American Top 10 so that?s when i thought if I?m being placed in the Top 10 in the entire World the Sky is my limit and now I?ve Danced on Broadway and?London?s West-End. And it still isn't finished 😉

What have you always dreamed of being or doing and have you reached that dream?
This might seem kind of silly but i wasn't one of those Kids who dreamt of being something? I have taken Life as it comes i think I?m very laid back. Like i said i would never have Dreamt of performing on Broadway and West-End, but something i would love to do is appear on Strictly Come Dancing in England aka in South Africa as (Dancing With The Stars) At the moment though I?m loving my Burn The Floor adventures for me this Show is the best Dance Show out there and i love everything about it. As long as my Body lets me I?ll do this!!!

When life gets in the way, what do you always remind yourself of?
Easy question! That I have the best Family and Friends back in Liverpool who will always be there for me.

We all have something unique to offer the world, what is yours?
I hope that mine is bringing pleasure to people who watch me Dance!

How do you deal with the fears that could potentially hold you back?
I think the biggest thing for me is that i miss all my Family and Friends so much back at Home, but i know that as long as I?m Happy they will be Happy too. The other thing that kind of scares me is Injury's because what i do is very demanding? on my body and one serious injury it could all be over. You have to take care of yourself so much and you know more than anyone your own body.

What do you believe we have lost sight of in the world as a whole?
Well you know at the moment being from England we have had all these Riots. I've been so disappointed in reading or seeing on the News what?s going on because some people just don't care about anybody else or who they hurt along the way. There will always be issues in the World its how we deal with them is what is important.

2 comments on “The life of a dancer: Gary Max Wright tells his project me story”