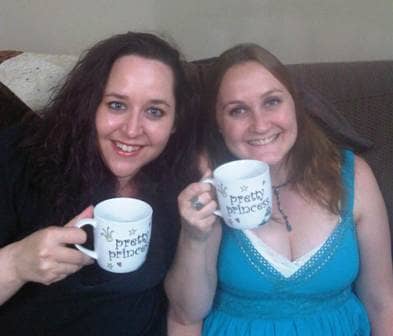 The most eventful day ever - project me day 407

It's not far off from the truth. By the time I closed my eyes to sleep I had to convince myself that I wasn't having a mini heart attack and it was most probably my heart's relief that the day was done. It's like a marathon of events so let's start at the beginning and hope I don't pass out just rethinking about it.

It was big change hair colour day. It took like 3 hours and three different colour applications, including a whopping bill that left me with a pang of regret. Luckily I had Hustler Girl by my side the whole time and her encouraging "Holy #@#% that's so much better, Jo!" sorted my silly money issues out soon enough. There are some thing that are worth every penny and this was surely one of them.

We had time to kill and Hustler Girl has a friend with an awesome restaurant so while walking out the door my little sis arrives and we all decide to go to lunch together. There are healthy salad and semi healthy wraps written all over the menu, but when Hustler Girls asks restaurant owner dude what we should try he points us in the direction of juicy hamburger and very juice steak?sandwich. Let it be stated that Hustler Girl is a horrid influence and has led me down the path of the devil once again, but my goodness, was it scrumptious.

That's not the kicker ... the fun part was returning home after a little shopping and moaning about the excessive food only to be asked by my little sis and her husband to be if I could stand in as bridesmaid for her friend who opted out (yes, these things really do happen) at the last moment. It's an honour and my little sis and I have come a long way over the past few months, but all I could think of was "Bitch, you watched me at that hamburger and knew you were gonna ask me!" I love what I'm wearing, but I am trying not to have an obsessive two days of eating a carrot stick only when I'm about to faint. Luckily the thoughts may linger but it's not in my nature.

The irony is that I wasn't involved in the wedding at all. The romantic part of me didn't want to see my sister's dress or anything to do with the wedding seeing as though I wasn't in the retinue. The other part of me wanted to avoid all the chaos of the day and just arrive as guest. Now I'm getting dressed with the family, arriving with the bride, walking down the isle and doing the speech in place of the best man who failed to be able to make it either. I did say my family life is eventful, didn't I?

Behind the scenes my blog has been a nightmare and I threatened my hosting company that I would start tweeting horrid things and blogging about them if they didn't sort their act out. So it was apologies, phone calls and swapping of servers. Thanks to all the events and passing the time at the hairdresser by playing games of the Blackberry, my mobile went flat. Yes, Hustler Girl had to tell me that staring at the dead screen wasn't going to be very productive, but what does a girl do if not hold her phone all the time.
I was also holding the phone because I seem to be thoroughly enjoying my time talking to the guy (who Hustler Girl has named as Inked Dude) who my friend is trying to set me up with. There are sporadic sms's through the day and with all the madness it's been wildly refreshing. Yes, the mean part of me keeps saying to enjoy it while it lasts because we know my history with men.

On the subject of men, The Jock called to say he didn't like my hair. Which is code for 'hot damn girl!'. He is my reminder that I can make that lasting impression, which is where most of my friends could kick me in the teeth. I'm still on the path to not needing those reminders of the impression I can make.

My dearest friend bought her and me matching tea cups! They say 'pretty princess' and it means the world to me. Without even knowing it, she kept me calm most of the day and especially helped with the build up to having to see the family who have arrived for the wedding from overseas. I have no shame about any choice I have ever made, but I was apprehensive about having to explain my tattoo being the Jewish girl and all. Hustler Girl kept talking me through it and reminded me that this is me and I don't have to explain myself to anyone. Well, I did in the end. Of course I got asked, but I handled it super well. I even used the words Goddess, Pagan, Moon rituals and my beliefs and I took it as a sign that it was a good enough answer when the subject swiftly changed.

It was such a hectic day that I didn't get to speak to Greggie at all ... on the day that it would have been great to have his sound advice. But in the end everything works out as it should and I had time to put it all into perspective and tell myself that life sure is that?roller coaster?he always tells me it is ... now to enjoy the ride for the next few days.