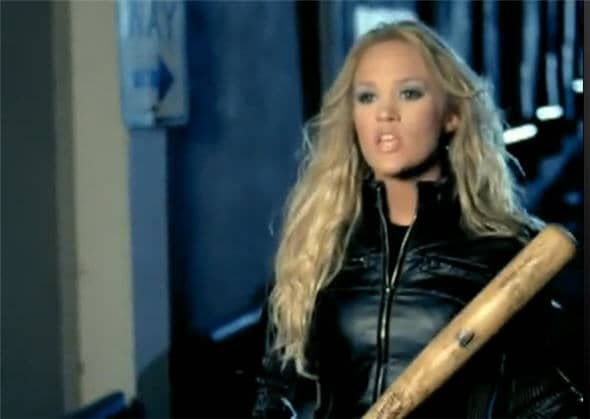 The other side of a romantic - project me day 339

There's my girl with her Louisville slugger 😉

Maybe it's because I'm doing some reading on personality theories and Carl Jung happens to be of great interest to me when it comes to his theories on our 'dark side'. Otherwise I'm just having the opposite of my sweetly romantic nature. Either way, today has been filled with a song that's basically been on repeat since this morning ... in my car and in the office 😉

How are these for totally unromantic words:
"I dug my key into the side of his
pretty little souped up 4 wheel drive,
carved my name into his leather seats...
I took a Louisville slugger to both headlights,
slashed a hole in all 4 tires..." Courtesy of Carrie Underwood - Before he cheats.

Okay, maybe there is more to this than I am letting on. So here goes ...
Remember the guy Shaman who came along and had me at 'hello'? The one who said I had him at 'hello' too? Well he's out of town for a while but we have been poking each other. Heads out the gutter, we are talking Facebook poking here. So last night after a fab time with friends I was lying on the couch and Greggie was oogling over Lourens' Ipad with him while I played on Facebook. I had struck me that I hadn't received a poke in way over 24 hours and so I went in to check if he had been active on Facebook ... GONE!! Totally gone from my friends list. I kid you not!! Well, of course I was mortified but when the boys went in to check on the ipad it seems as though he has vanished from Facebook.

Granted ... he is completely gone and didn't only delete me, but it's not the first time I have manifested this in my life. I meet men and they vanish without warning and then upon their return they go: "oh, did I forget to mention ...". It happened with my fireman, film guy and the list goes on.

I am the girl who knows that I create my own reality and that everything is exactly as it should be ... sigh! So I'm trying hard not to let it play on my mind too much and already woke up with a cough and burning chest ... which is obviously me being mean to me!

We know that 'project me' is about turning it all around, so I have spent the better part of the day reminding myself that the right one isn't going to vanish into thin air and just how fabulous a girlfriend, lover and friend I make. That's all worked ... as for the dark side, she healer herself by dreaming of taking Louisville sluggers to a pretty little souped up four wheel drive ... tee hee 😉

PS ... ?16 days to go and what's a Country Christmas countdown without Dolly?