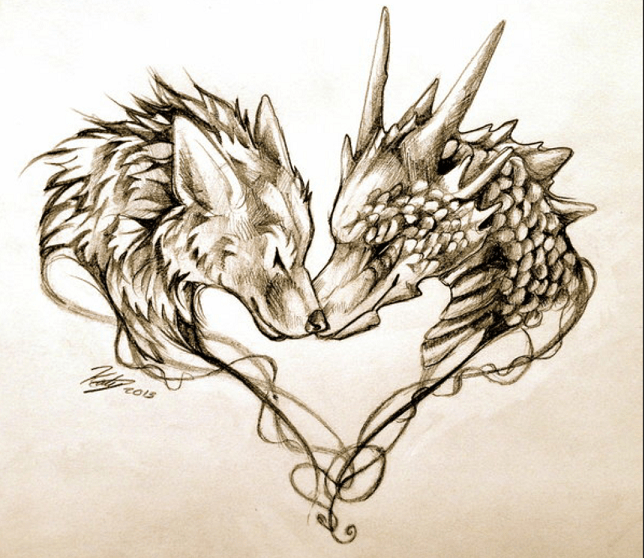 The day I decided to get my first tattoo, and knew what I wanted, the hunt began. It didn't take long and when I found the Moon Goddess, it was love at first sight. That's what a tat is meant to be ... the symbolism that will ensure your making will be eternally sacred and the image that speaks to your soul on the canvas of your life.

Yes, I'm that passionate about the one I have and I have wanted another one since the day I got the first in 2010.

A dragon and a wolf ... I never would have blogged about this pre my back injury all those years back, but if it weren't for my belief in the other world and my drawing of strength from my own forms of medicine and healing, I don't know how long that recovery would have taken. That was the first time I spoke about it, but I've had my guides with me for many years.

My wolf, my totem guide, who stares me down when dare fall into the shadow of my strengths and abilities.
My dragon, who smashed things in my home, in a clumsy attempt to get my attention, until I made space for her in my life.

We all have beliefs that someone else doesn't understand or resonate with and for the longest time, I lurked around, unsure of how the world would react to. Then I started to meet people who guides too and who proudly marked their bodies with the energies that have helped them mold their lives into what they are today.

For me, these two energies are fundamental in who I am, what I believe in and what carries me to where I am going.

I have wanted to do this for ages, but planned to do two different tats, one of the wolf and one of the dragon. I have even had the dragon sketched more than once, but no one seemed to get it right ... so I kept putting it off.

Then the other day I met a man, who was a stranger, but after less than half an hour of connecting and remembering each other from lifetimes, he said to me, "so how's your wolf?" Then he asked me if I knew my totem was a wolf? Well ... isn't that stuff about totems and soul mates (hundreds in one lifetime) and all of that so very true!!

It's only been a few days, but I got increasingly anxious to find a tattoo artist to draw this wolf and this dragon and combine them in some way. It really is true that when you are ready, it will appear. I have been searching for over 4 years and tonight something made me Google "combined wolf and dragon tattoo"

And now for the tattoo artist to appear on the winds of the same energy!