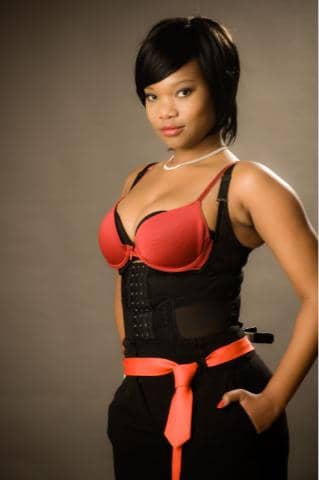 Tshepi is a Pedi princess whose roots are in a charming village called Bushbackridge in the majestic Mpumalanga, but was raised in pta. She caught the theatre bug after her first school musical called GODSPELL. She then studied Musical Theatre at the Tshwane University of Technology after which she started her professional career in a musical called HAIR she then proceeded to do many shows including, PINOCCHIO the pantomime, HIGH SCHOOL MUSICAL the international tour.
She played Columbia in the ROCKY HORROR PICTURE SHOW and performed in the ELVIS TRIBUTE SHOW for Showtime Australia as well as headlining in MUSIC EVOLUTION, a Sun City Extravaganza. She was also featured in BLUES BROTHERS and she has also worked in TV extensively highlights being, playing the role of Diphuka on RHYTHM CITY, and has featured in the film GHETTO CHILD.

Tshepi is also a proud Member of the phenomenal girl band THE BRUNETTES!

On a personal note:
I have had the great joy of seeing Tsephi perform on stage and her current performance in Homegrown at the Globe Theatre, Gold Reef City had me in awe at her energy, talent and absolute passion to entertain. Look out for Tshepi wherever she goes because she's just absolute fun & food for the soul.

Tshepi tells her project me story:

What is your definition of happiness?
Being?satisfied?with who you are, what you do and how you do it ? as Maya Angelou said

If you could have everyone say one thing to themselves every day, what would it be?
To look in the mirror and say ?you?re amazeballz?

We all have that moment when we need someone to believe in us. Who is that person for you and why?
My sister ? Puseletso ? she is 5 years younger than me, but she is like my lil? big sister.

What quality do you believe we can never be taught because it is our birth right?
To be humble

Describe the moment when you realised that you could achieve anything?
I don?t know if I?ve had that ?Aha!?-moment yet ? but I look forward to it.? I mean ? I am a human being.? We all have our hard days and our obstacles.

How do you deal with the fears that could potentially hold you back?
Because I was raised Christian, I put my faith in & get my?strength?from a Higher Power.

What have you always dreamed of being or doing and have you reached that dream?
Yes!? My?favourite?thing to do ? being on stage - and to make someone feel better or forget their troubles for a few hours.

When life gets in the way, what do you always remind yourself of?
Somewhere out there there?s always someone having a worse day than me.? And every challenge is a lesson waiting to be learnt.

We all have something unique to offer the world, what is yours?
I have been told I have an?infectious?smile and internal happiness and I love to share that.

What do you believe we have lost sight of in the world as a whole?
Mutual respect for each other as human beings ? regardless of?financial?status, occupation, race, gender or sexual orientation.