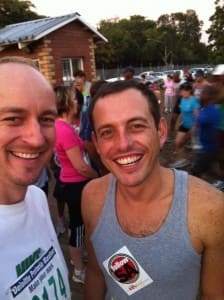 @ohgodknows & @jaakOrilla before the race ... note you won't find many 'after' pics ;p

It's Monday! I have to admit that my body didn't really care and I woke up far too late for a work day. At first I felt guilty and wanted to kick into some form of self sabotage that scream of me being lazy, apathetic or maybe losing passion for what I'm doing.

I set my alarm for before the sun even rose on Saturday morning, to be on time for the Deloitte Pretoria marathon that was starting at 6;20am ... all the way in Pretoria of course. Not that I had that problem because I was not running, I was only Tweeting. Um ... no ... not from the sidelines but from the comfort of my bed. But, yikes, who wakes up at 5:45am to Tweet!

Me! All in the name of ?#FollowSA and supporting my best friend, Greggie, who was holding the flag high for our first sporting team. Two runners for team #FollowSA and a few others who were willing to grab stickers and add to the bodies, made it so exciting lying in my warm, cozy bed and Tweeting all the way until the finish line had been crossed and they 10km champions were sipping on cold beers.

Of course Greggie and I always have a combo of fun and work in the same agenda and so this event was another #FollowSA way of gathering stats and seeing the power of the Tweet. Wow, it was powerful indeed and here's Greggie's blog post to prove it.

All the jokes and giggles aside and being a total treat to post from bed, I don't always wanna be doing that. I want to Tweet on the run and I certainly don't want to miss out on such exciting #FollowSA events. So why am I not out there?
If it weren't bad enough that my back doesn't allow for doing any kind of running, there's always the possibility of me being the 'Tweet on the walk' kinda girl. The only thing standing in my way is getting my fitness up and that's being halted by this bloody ankle of mine.

So I went for x-rays and there's nothing broken but the?ligament?is damaged and my doc seems to think that I'll be fine with how long it takes for an injury like this to heal. His instructs are to not overdo the anti-inflammatories or the ankle guard but I've now decided that I'm going slightly mad. This ankle injury happened last year already and I know I haven't mentioned it much, but it's holding me back from getting back to gym and I'm going mad.

The excitement of the first of many #FollowSA sports teams ?and I know that I want to part take in whatever I can. Who knows, this might be the thing that gets me going and sorting out the weight I want to lose and getting me feeling fit and fab ... it's 40 next year you know 😉