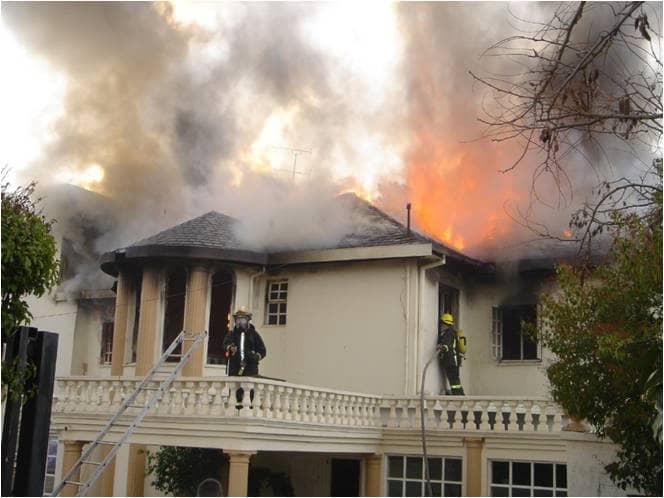 Vivid memories of a life changing fire - project me post 866

I've started to notice who I constantly think that time flies and I'm slowly heading to 40, and while trying to pull myself together and remind myself that I'm only 38, I find myself looking back on my life and realising how long ago some things happened. Today will always have mixed emotions, being my bother's birthday but also the day that my business burned down. It was in the bottom section of my family home, so there was a lot of loss on that day.

I wasn't half the person I am today and when my mom called and said, "the house is on fire" I remember feelings two things ... guilt and panic. I think it's natural to panic at a call like that, but to immediately think that it was my fault will always shake me up a little bit. I owned a small day spa then and I was convinced that I had left on a wax pot or electric blanket or something.

It was a freezing August Sunday and as I drove from Sandton to our home on Corlett Drive, I could see the thick black clouds high up in the sky. With another 10 minutes to drive and knowing I was heading to wards those flames, I remember trying to drive and every inch of my body hysterically shaking.

11 fire trucks were on the scene and I had to park 3 blocks away and run to my family who were standing, in the centre Island of Corlett Drive.

Wow, I can't believe what it's like to reflect back on that day, and as I wipe tears from my eyes I remember realising that our parrot and little canary wouldn't have ever survived those flames.
My dad had?emphysema and had oxygen tanks in his room and office. Sadly, the fire started from a plug point in their bedroom, but fortunately my brother (who was home at the time) saw the smoke, realised there was a fire and run to get help in the streets. That's a miracle right there, because windows in building nearly 4 blocks away shattered when the oxygen tanks exploded.

The following morning a fireman walked me into the building and allowed me to pick up only my appointment book so we could cancel all of our clients. The water was up to my ankles and everything around me was covered in black, but they had managed to stop the fire before it ate away at the last corner of the building.

What do you do first? Who do you call? Where do you go?
We opted for our insurance broker who came to check the damage and very politely told us that we had a week to get our business up and running elsewhere or we wouldn't be insured. He also told us, that even though we were insured for R1million we should be prepared to get less than R100 000 ... and only after we proved we could carry on our business.

That night, I got home to my where I shared an apartment with a friend. I still smoked then, but had run out, so I went to her room to grab one of hers. Let me just interject and say that I truly haven't ever touched a drug before, but have been touched by drug abuse and what I found tossed my life upside down even more. To cut a very long story short, she admitted to drug abuse and to having men in our house when I was not there ... and within 24 hours I was homeless too.

There is nothing like family. Maybe I'm one of the few lucky people who get to say that, but things weren't even great between all of us when the fire happened and within moments we had all pulled together and supported each other every step of the way.

That's when I realised just how strong I had the ability to be. I was still full of drama and petrified to do much, but I had no choice (well, we always have choice and I guess I chose not to give up) and within a few days we had salvaged what we could from the building and I had found a new place to?temporarily?relocate my business and my home.

Although so much fo the day was blur, I can tell you what I discovered about myself:

Since then, I have changed my career and so much of what that fire was trying to tell me was that I wanted something more. I took me years to hear the message, but when I did, I made another brave and bold move.

And that's the last thing I learned about myself: I might not hear what I should when life thinks I should, but I hear it when I'm ready ... and always at the right time.