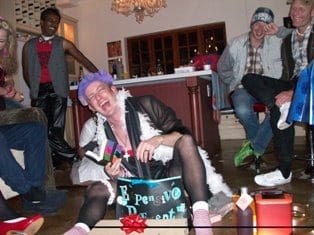 There are so many special gifts that Greggie has given me in the 6 years of our friendship, but one of the best is the ability to have fun, let go and live. His themed parties are just one way that he is a gift to more than just me. This years's theme ... Trailer trash!

So this is what we have in common! Greggie and I have our famous pouting pics for every occasion. Say 'trashy'!

Actually, there's a prize for the best dressed safely stashed away in my bra ... trashy enough?

This is my first attempt at baking, and although the end result is trashy and sparkly ...the baking experience was a laugh a minute. Once scraping the icing sugar and cake batter off the walls, it was something fun and definitely on my list of things to do ... over and over!

Greggie and Risky Business showing off their finer assets!

Bunny chow is a traditional South African dish consisting of curry stuffed into bread that goes super soggy and is the prefect food to go with the 'trailer trash' theme.

Every character had a story to tell and mine was looking for the daddy. He might be my Knight, but the reality is he's just not trashy enough.

What would a trashy party be without a whole lot of inappropriate behaviour?

He's been spoken about often enough and now I get to share my special Knight ... also known as my web designer and special friend!

Let's take this outside shall we?

It's hard to believe that we've only known each other a few weeks. There has been something special about Risky Business from the moment we met ... even though he's so much younger and totally looks better after far too much punch

Although I was ladened with false tats, my real one on my back is healing so nicely and I couldn't be happier. I've waited for years and now I know that every moment was and will be worth it

No, this isn't all for me! Actually, this is the secret ingredients of the punch that went down a charm. There wasn't a drop to be spared after a top up of half a bottle of cane and another of vodka ... trashy!

Not being one to talk, but I did lose the preggie tummy after my feet began to kill me and my back began to ache! How do theses mommies do it? Oh ... and then I became the spokesperson for safe sex ... 9 months too late!