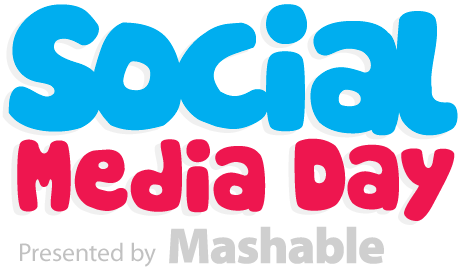 We did it: Mashable's SMDayJozi - project me day 538

I like having a partner in crime and I'm so excited to introduce you to Derek Martin for an event that truly is defining me as the social influencers I have been working so hard at establishing myself as.

I had a plan to work with Derek on the night I met him at the Twitter Blanket Drive. It goes like that with me and I've made some great decisions that way. I had the same feeling when my Twitter friend, Liam told me about the Mashable International Social Media Day. Granted, we had about 10 days max to organise it, but when one of SA's most advanced social media hotels, Crown Plaza Johannesburg, offered Derek and myself the venue then plans started to spiral.

The friends in my life are all a combination of talented in their own fields and extremely generous. With such a magical cocktail it was so special to have both Emmanuel Castis and Nick Duncan agree to contribute their talents to this exciting event. Both have already supported 'project me' by being interviewed for the blog and their generosity keeps flowing. Emmanuel is an incredibly talent actor, singer and celeb (and one of my favourite Twits) who will be singing on the night. Nick is the developer of SA's Aggregator, My Scoop and one of the smartest people I have had the honour of meeting in the realms of social media.

We all know that I'm not mad into sports but a huge shout out has to go to Follow the Bounce (Twitter handle for Ben Karpinski) for having the following he does and showing the chilled out, sports mad and super fun side of Twitter. Derek made this happen and we are thrilled to have Ben as a guest speaker for the event.

But this is the best part ... yesterday Derek and I sat at the Crowne Plaza, which is by far the sexiest hotel this town has to offer and we set out to create the event and get those invitations out. With a limit of 120 people, I did get myself in a state and imagined 20 people hanging around on the night. I need to give us as a team and as South Africans a huge well done for hitting our target in less than 24 hours.

I know this blog totally sounds like a press release, but I can't believe I'm here and I literally am making a big announcement. Myself and Derek grabbed the bull by the horns and are totally hosting an international event!
It all goes down in a week today and the next few days are all about press releases, media info and ... um ... Derek, what else???

Something has changed over the past few weeks and I must admit that I feel as though it's a bit of a whirlwind. Not one thing is the same ... I'm doing 'project body' which includes eating?differently, hitting the gym first thing in the morning and having a totally different mindset. All of a sudden I'm falling for my friend and am doing my best to take it one day at a time ... tell that to a heart.
I've been asked to talk at a ladies breakfast for 120 woman thanks to yet another project me partner, Regim A and the first issue of Curvy SA, with my article in it, goes out very soon. That's a lot ... right?

Well, not nearly enough with my cheerleader standing behind me. I don't know how it all began, but I have found inspiration in my friend, The Gossip Guy that goes beyond words. When something exciting happens I just want to phone him and when he tell me to do something socially bold, I get my fears in check and run with it. All while he's settling into his new home and new life ... So today my Gossip Guy told me to sort myself out and get my blog off to one of the magazines who features a blogger a month. Okay, I knew they did that and made a half' hearted ?attempt not so long ago, but that's it ... no half hearted ... not for nothing!

This huge step to bring a Mashable event to life seems to be the wind that caught the sail and I feel like I'm really doing it ... sailing into the sunset!