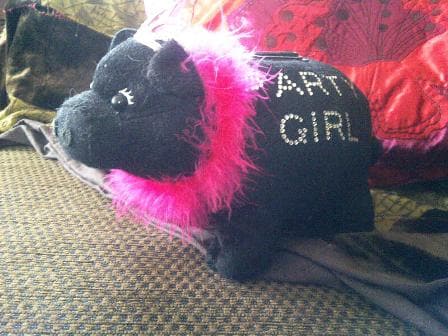 We got engaged because pigs flew - project me day 766

I often wonder when that moment will arrive that I realise just how powerful it has been to journal my life. Strategy and business aside and after everyone has read the story and long forgotten the post entry, I think back on a day in my life and look at where I am now and be so proud of me.

That day is today!

I thought of so many things that I would want to share with my readers and what would define my happiness but I don't think I ever ?truly gave love and happily ever after enough credit. I don't remember planning a blog that shared the story of my engagement to a man who has taught me so much about love, life and me. But here I am telling my tale of how a pig flew and I now I have a shiny ring on my finger.

Seriously ... a pig did fly!
Meet our piggy bank! She's a real gem who sits in our cupboard and collects all our coins at the end of each day. Once her tummy if full, we use all the money up. After the last amount went to getting us through the Christmas season, I decided that the next batch of money would go to something a little more exciting. You see ... no one knew that I had planned to propose to Pat on the 25th of February because of the leap year tradition. With that in mind and knowing that a ring would be dependent on how full piggy's tummy was, I was madly throwing my coins on.

On the other side of the coin (excuse the pun) life seems to have become very unstable for me of late and I've been a little bit (okay a lot) of an overly sensitive girl. In my mind, I had already decided that Pat would run a mile when I spoke on engagement ... not marriage but the true essence of being promised to each?other and merely engaged. Because work has been tough and therefore it's been hard to be healthy, everything that Pat's been saying I've been taking very personally. The one gift we have truly given each other as a couple is that we talk. We really sit down and get to the bottom of things even if there's some yelling in crying in between. There was both and I decided that I would say 'I'm sorry' by counting the coins with my man and telling him that we were really going to buy something very special with each penny we saved.

Well, didn't he reach for his laptop to work when I went to go fetch piggy! So there I was sulky, hurt and over sensitive again and my poor man not having a clue what was going on. More like it ... he didn't know what hit him! Well ... a pig hit it!!
It went flying across the room and I burst into tears telling him that he couldn't bother counting our coins and it was supposed to be a joined adventure of getting engaged on the 29th. How's that for ruining a surprise?

I went downstairs, sobbing and finally took dinner from the oven, that was 60% burned ... okay stop rolling eyes and hearing the music to Days of our Lives in your head ... the drama ends soon!

While I was downstairs thinking Pat was contemplating his exit, the man in my life was upstairs taking in that money doesn't determine anything remotely related to the when, how and why of happiness. Without discussing it, we had both made money the reason why we hadn't done what we both wanted with all our heart and soul. So there we sat, both a little dazed at the truth we had spoken and that somewhere between pigs flying and that moment, we both wanted to be engaged right away.

We event tried to go to a gorgeous night market in Fordsburg in the hope that a jewely store would be open on a Friday night but we had to wait for the morning. I got through my live radio show and then we headed off to do some ring shopping because the 4th of February was the day that we were going to get engaged.
A part of we hoped that I wouldn't find anything for hours, so that I could try on dozens of rings and feel like a princess in a fairy tale ... but then I realised that I am a princess and this is my fairy tale and in that the second ring I tried fitted perfectly and just yell out to both of us.

Pat then drove around Joburg for a while and kept me guessing as to ?where he would slip the ring on my fingers and despite arriving to a closed?restaurant where we both realised there was more than just friendship nearly 9 months ago, we sat in the car, remembered that night and he slipped the ring onto my finger.

Romance and the perfect way to propose is as unique as the print on that engagement finger and I could have thought of a more beautiful way to become each other's betrothed. I mean, how many people can actually say that they got engaged because of a pig that flew?

Pat and I would like to thank everyone, especially my family, for your excitement, blessing and celebrations that start a new and precious time in our lives.
We won't be talking marriage soon because there's something special about the tradition of being engaged and the pagan part of me sees value taking at least a year and a day to just enjoy this moment ... the moment of making a promise to each other and knowing that there is nothing more valuable than that.