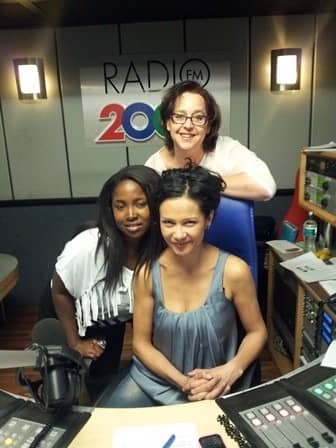 A great lesson that I had to learn as a business woman, is that not everything we set our hearts on comes to fruition. It's also been something that I have had to learn to deal with along my Project Me journey and believing that only the things that I truly deserves will come off, has been the toughest lesson of all. Hence I've been so quiet in the blogging space.

The wait to be?absolutely?certain has left me feeling a little speechless of late. But Friday changed all of that.

I woke up feeling the perfect combination of proud and excited on Friday morning and couldn't believe that my day was about to be filled with two milestone I have worked so hard for.

It was off to the 2000FM studios in the morning for the first of my very own segments called #GoSocialFriday.
I'm not new to radio or to 2000FM and Angela Ludek has been instrumental in my journey over the past year and a half. I used to feature on her weekend show every 5 of 6 weeks and talk social media. Now that she has had an exciting adventure with another one of my favourite presenters, Tsheko Mosito, I get to go on an incredible ride with them. They are now the co presenters of the morning show called #TheCollective2000.
The time on air was amazing and because Angela, Tsheko and I are have such a clear and common vision, I get to talk about what I Lifeology most passionate and good at ... the social of social media.

I got to explain what I do and I could feel my pride in finally being settled into the social media space with an unwavering confidence.
I'm loving the curious response to the term "social media publicist", but I'm also loving how people totally get it once I explain it to them and then see how it's the perfect fit for my career.

Where there is a calling for any?traditional media at events, launches or where news is breaking, there is now a very significant place for "new media" ... and that's my job ... to get the correct new media to all of those events.

On that note ...
If you've been following my story for a while, you will know that one of my greatest joys has been blogging about my experiences at the Joburg Theatre. It has been the highlight of my blogging career, with the theatre giving me my first break to blog about Burn the Floor over 2 years ago. From then, it has slowly become my home away from home and I fell in love with the idea of being involved in whatever way I possibly could. One of my beliefs is that we should never limit our possibilities by becoming fixated on an idea and the opportunity I have been presented with is a prime example of this.

I would have been thrilled with some behind the scenes moments or a backstage pass or two for major events, but instead, on Friday I signed my contract as social media publicist for the Joburg Theatre.
I got to meet the cast of the upcoming production, #StarlightExpressSA and share my plans with them about making the theatre the most socially savvy this country has seen. This all begins this week with the introduction of #TweetSeats (specially allocated seats for socially savvy Tweeters) to share the experience of #greatestloveofall, Whitney Houston Show as it happens.

I'm beginning to get the feeling I'm going to be tattooing "passion pays off" somewhere on my body! This is why ... moments like this! Days like this!

Tonight I'm in bed by 8pm and gearing myself for finalising RSVP's for #greatestloveofall before dashing to the theatre to give 7 new media the first behind the scenes peek at the #StarlightExpressSA cast in action.