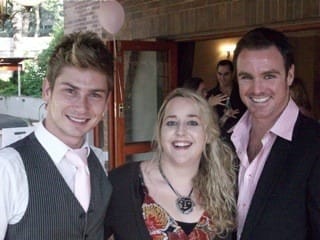 It's the morning after an incredibly rewarding day. On the very rare occasion I miss a day of blogging and after all the excitement and medication to get through the day I literally collapsed into a heap last night. That doesn't mean the events of the day didn't play over in my mind and left me drifting off to sleep with so much gratitude.

I'm taking a break from any medication today because I dosed myself up yesterday (and added a dash of wine for an extra pain-free kicker) to get myself through two very important events. So this blog might take the whole day to do because I'm listening to my body and resting as much as possible. Can you believe that sitting is still such a pain in the butt?

Of course I get the first 'well done' goes to me for a few reasons. Firstly, I took tablets with a little less resistance and am beginning to listen to my body and take them when I need to. My day began with a mini high school reunion with three friends including Angie who has just lost her sister, Mel to cancer. I was a little anxious to see her because you never know what to expect and here's the second 'well done'. Angie has been that pillar of strength from as far back as I can remember. I think she even carried me through a Zulu exam or two back in high school. We spoke about Mel with such fondness and I shared the fact that this is my closest loss to cancer. The irony is that Greggie would be talking, on behalf of Lifeology, at a tea for CANSA a few hours later.

The first 'steaming hot' also goes to Angie who is finally stepping into the world of technology with her new Blackberry and a soon to be friend on Facebook. It was so great to laugh with old friends and be reminded of the fact that time is an illusion when there is a bond.

Have I ever mention that my brother is the bomb (sometimes) and wouldn't let me catch a lift home with anyone. He hung around the Lifestyle Nursery until I was ready to go. It's moments like those when I see the valiant heart and know that whoever gets him will be a very lucky lady (sometimes)! ... steaming hot!

The dress sage ... of course it didn't end up being a saga at all and I loved wearing the dress. No wonder I'm a fake cowgirl. I think I step out of my jeans once in a blue moon and to be shoved into a dress was a bit of a moment. I even put a pretty flower-thingie in my hair, so a 'well done' goes to a huge 'project me' moment because I?sauntered right out of that comfort zone. Can't say I felt 'steaming hot', but baby steps are allowed.

93 on Jan Smuts is fast becoming a home away from home for Greggie and myself and it was an honour to be a part of the Tea for CANSA event. No one has a better sense of humour that Miss Universe who decided to flash her magnificent thunderbolts just as Greggie started his talk. Yes, he was standing under a tree. Everyone grabbed a chair and ran for shelter. Everyone except me though ... I get yet another 'well done' for not having issues about my back and allowing strangers to help me all through the day.
One not-so-stranger was my incredible best friend and business parter, Mr Greg Arthur, who was steaming hot when he captivated the crowd in the way that I haven't known anyone else to. I always tell him that he could speak the biggest load of tripe and he would still have people in awe. It's not just because he's so dear to me but because he has this presence that I've never quite been able to explain. Well done Mr Arthur! PS ... he does get an additional 'steaming hot' acknowledgement because he is just that ... gorgeous with a killer smile! And he was?amongst?some very impressive eye candy.

I love it when charm and good looks collide and 93 on Jan Smuts, picked the two perfect MC's for the day. JC Snooke is a semi finalist for the 2011 Mr South Africa and this gorgeous guy gets my vote. Just for that he gets a well done but he did get an additional steaming hot nod of approval because it seems that we have blogging in common! You have to check it out ... his personality shines right through and that's the greatest lesson I learned when I was settling into 'project me'. I remember the humble beginning when I sounded all teacher-like and was so conscious of the fact that I have more words than most other people.

Greggie was amazing and had one eye on me the whole day. I can't?guarantee?that it was all for the intention of making sure my back was holding out because he might have been waiting for me to be?inappropriate (as I have been known to be) and totally tarnish the name of Lifeology.
Bearing that in mind, I opted not to tell the second MC, Stephen van Niekerk that I used to be addicted to Isidingo (an incredible South African TV series that Stephen acts in) but managed to ween myself off the program and now have a much healthier relationship with the make-believe peeps. Instead I jumped on his case and encouraged him to carry on blogging because the reason for him being a South African personality is just that ... he has such an amazing personality and has this natural story telling ability ... ?and he totally gets a 'steaming hot' for that.

Well done to both guys who made the event so much fun. That's when my body began to fold though and I could hardly stand let alone participate in the activities they had planned for the guests to win prizes. I don't mind the limelight on me when I have that sparkling personality, but when the body is broken I would much rather sneak way from it all.

I can see when blogging days are all about 'project me' and when they are about 'Jodene the blogger'. I can feel how my life is beginning to take a new turn and that days like these force me to pinch myself and acknowledge that I am there to tell other people's story too. It always seems to be more apparent when I am acknowledged and introduced as a blogger. I still want to look over my shoulder and say 'who?' but it's sinking in ... and it seems that I'm steaming hot at it thanks to the recognition and support I received from the 93 on Jan Smuts team.

About them ... well done, well done!!! Not even the rain dampened this perfect event and I was to honoured to be a associated with 93 on Jan Smuts. I keep saying it ... my dad would have loved it there! It reminds me of my home when I grew up and the staff remind me of the fact that employees are people too. My dad taught me that and it's a rare thing to see, but 93 on Jan Smuts get it so right. Steaming hot day guys!

The last well done and super steaming hot acknowledgement goes to none other than ... me!! I started blogging at about 10am and it's now 7:30pm on the day after the event. Yet I am still tablet free and have listened to my body as I have danced between sitting, lying, standing, (dashing out to the shops ... not supposed to have happened, but hey!) and back to sitting!

It seems everyone around me rocks! How did one girl get so lucky?

For donation in support of Angie's sister, Melanie Laskey, who surrendered to cancer on the 12th of October 2010.

In support of CANSA who help those fighting and surviving cancer.